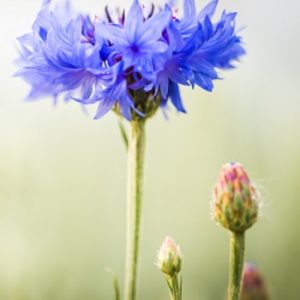 Edible flowers are a surprising as source of healthy fatty-acids, carotenoids and more according to new research. [Photo: Bigstock]

In this age of Instagram and social media food photography, pretty edible dible flowers can often be seen brightening up photos of salads, soups, meat dishes and more.

But, say, Portuguese researchers flowers aren’t just a pretty garnish. The scientists from the Polytechnic Institute of Bragança, Porto University, and the University of Aveiro in Portugal analysed the phytochemical composition of borage and centaurea, two popular edible flowers.

Overall their  findings suggest that “daily consumption of edible flowers may contribute to supplying some macronutrients, vitamins, and organic acids to the human diet.”​

The study, published in the journal Food Research International, ​also concluded that consumption of the petals from these flowers can, in particular, contribute to the daily recommended dose of vitamin E (mostly alpha-tocopherols), based on a 100g dry weight of each flower petal at all flowering stages.

What’s in a flower?​

Further analysis of the flower petals collected from the greenhouse of the School of Agriculture of the Polytechnic Institute of Bragança, was conducted lookign at the flowers at different stages of development (tight bud stage, mature bud stage, and fully open).

They then analysed content of dietary fibre, carbohydrates, fat, protein, fatty acids, vitamin E, and carotenoids – which is a pigment compound that has been linked to eye health benefits and more.

The nutritive value of both flowers were quite similar. The main differences were that centaurea had more calories and total dietary fiber, while borage was higher in fatty-acids and carotenoids.

Looking at true petals alone, without the bud, borage had the lowest total carotenoids.

“Despite the lower amounts of some compounds…These characteristics may therefore encourage the use of edible flowers (whole flower and petals) for human consumption,” ​they concluded.

Both centaurea and borage have a long history of culinary use.

Centaurea (Centaurea cyanus), also called ‘blue cornflower’ or ‘bachelor’s button’, is a plant native to Europe. Its flowers have no fragrance, but they have a sweet-to-spicy clove-like flavor. Centaurea petals are ideal for mixing with other flowers to make dishes more attractive, for sprinkling over salads and can be used as an ingredient in tea.​

Borage (Borago officinalis) is an annual herb, that is native to some parts of the Mediterranean region, and is cultivated for medicinal and culinary uses, but primarily for borage seed oil. Borage flowers are also blue and on rare occasions appear white or pink. Petals have a cucumber-like taste and the stamens add a hint of sweetness. The flowers are used in vegetable dishes and fruit salads, to garnish soups or decorate desserts, as well as in ice cubes for summer drinks.

Edible flowers are a surprising as source of healthy fatty-acids, carotenoids and more according to new research. [Photo: Bigstock]