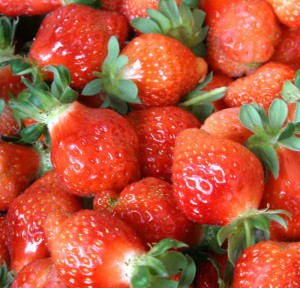 In this small study released 12 healthy volunteers were fed half a kilo (500g) of ‘Sveva’ strawberries (a variety known to be particularly high in antioxidants) over the course of a day for two weeks. Blood tests showed that eating strawberries improved the antioxidant capacity of blood plasma and also made the red blood cells more resistant to fragmentation.

This blood call boosting effect has previously been shown in laboratory experiments, but this human study adds weight to those findings. Strawberries contain a large amount of phenolic compounds, such as flavonoids, which have antioxidant properties.

These substances fight the free radicals and oxidative stress in the body, which has been linked to certain disease such as heart disease, cancer and diabetes and to premature ageing

The researchers’ next step is to look at different varieties of strawberries to see which kinds offer the most benefits.

In a related study researchers at the Salk Institute for Biological Studies report that fisetin, a naturally-occurring flavonoid found most abundantly in strawberries and to a lesser extent in other fruits and vegetables, can lessen the complications of diabetes and may well be of benefit in nervous system disorders such as memory loss.