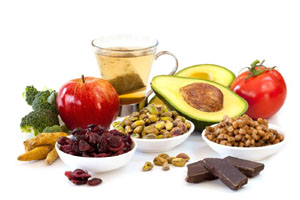 Natural Health News — A recent study suggests that maintaining a diet high in antioxidants may reduce the risk for heart failure.

Antioxidants are molecules that work to prevent damage that occurs in cells and body tissues produced by both normal bodily processes and exposure to some chemicals. The potential medical benefit of antioxidants may reside in their ability to prevent or slow the oxidation of molecules and thus the production of cell-damaging free radicals) in the microscopic parts of the body, such as DNA or proteins.

In a new study, published in the American Journal of Medicine, researchers evaluated data on 33,713 women taking part in the ongoing Swedish Mammography Cohort – a study designed to shed light on the relationships between a number of modifiable factors (diet, vitamin supplement use, physical activity, smoking, alcohol, body weight, etc) and the incidence of several major chronic diseases in women.

Estimates of the total antioxidant capacity (AC)  from the women’s diets were collected through questionnaires (AC is the cumulative action of all the antioxidants present in plasma and body fluids). Heart failure data was then collected through 2009 from health registries.

There were 894 cases of heart failure during the 11.3 year follow-up period. The researchers found that women who reported diets with the highest total AC had a 42% reduced risk of heart failure when compared to those with the lowest total antioxidant capacity.

The authors concluded that these findings support the view that maintaining a diet rich in antioxidants may lower the risk for heart failure and call for more research.

Antioxidants are proposed to play a role in preventing many common health disorders, such as Alzheimer’s disease, heart disease and some types of cancers.

Vitamins A, C and E were some of the first antioxidants identified by medical science as possibly beneficial to human health.

Antioxidants are found in varying amounts in foods such as vegetables, fruits, grain cereals, legumes and nuts. They are available as supplements and are currently one of the most popular categories of supplements available today.

Some antioxidants such as lycopene and ascorbic acid can be destroyed by long-term storage or prolonged cooking. Other antioxidant compounds are more stable, such as the polyphenolic antioxidants in foods such as whole-wheat cereals and tea.

In general, processed foods are thought to contain fewer antioxidants than fresh and uncooked foods since preparation processes may expose the food to oxygen thus creating more free radicals.