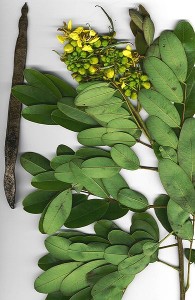 Senna pods are natural laxatives; but any form of colon cleansing may do more harm than good [Image: Forest & Kim Starr - Wikimedia Commons]

Colon cleansing has no benefit but many side effects

Colon cleansing has been described as a natural way to enhance well-being, but a new data suggests there’s no evidence to back that claim.

A review of the published evidence published in the The Journal of Family Practice, examined 20 studies published in the medical literature published in the last decade. While these reports showed little evidence of benefit, there were a number of adverse effects recorded following the use of cleansing products including cramping, bloating, nausea, vomiting, electrolyte imbalance and renal failure.

The procedure, sometimes called colonic irrigation or colonic hydrotherapy, often involves use of chemicals followed by flushing the colon with water through a tube inserted in the rectum. It has ancient roots, and although it was discredited by the American Medical Association in the early 1900s, the practice remains popular at some spas and clinics.

“There can be serious consequences for those who engage in colon cleansing whether they have the procedure done at a spa or perform it at home,” says the paper’s lead author, Dr Ranit Mishori, MD. “Colon cleansing products in the form of laxatives, teas, powders and capsules …tout benefits that don’t exist.” She also notes that the safety and efficacy of many of these products are not monitored through official regulators such as the US FDA says many colonic therapists are of questionable training and expertise..

Mishori says there are much better ways to enhance well-being: “Eat a balanced diet, exercise regularly, get six to eight hours of sleep and see a doctor regularly.”

Senna pods are natural laxatives; but any form of colon cleansing may do more harm than good [Image: Forest & Kim Starr - Wikimedia Commons]