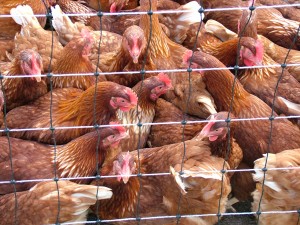 A new study has identified a multidrug-resistant strain of Salmonella. The strain known as S. Kentucky  was isolated from chickens and turkeys from Ethiopia, Morocco, and Nigeria, suggesting that poultry is an important agent for infection.

The common use of antibiotics such as fluoroquinolones in chicken and turkey production in these countries may have contributed to this rapid spread, the researchers say.

The study, led by Dr François-Xavier Weill and Simon Le Hello at the Pasteur Institute in France, is published in The Journal of Infectious Diseases.  Dr. Weill and colleagues studied information from national surveillance systems in France, England and Wales, Denmark, and the United States.

The data showed that S. Kentucky has infected 489 patients in France, England and Wales, and Denmark between 2000 and 2008. In addition, researchers reported that the first infections were acquired mainly in Egypt between 2002 and 2005, while since 2006 the infections have also been detected in various parts of Africa and the Middle East.

The absence of reported international travel in approximately10 percent of the patients suggests that infections may have also occurred in Europe through food consumption of contaminated imported foods or through secondary contaminations.

Salmonella infection represents a major public health problem worldwide. An estimated 1.7 million such infections occur in North America each year. More than 1.6 million cases were reported between 1999 and 2008 in 27 European countries.

Although most Salmonella infections produce only mild gastroenteritis, elderly and immunocompromised patients are especially at risk for life-threatening infections. These cases are typically treated with antimicrobials called fluoroquinolones, such as ciprofloxacin.

* In a related story researchers at the University of Maryland School of Public Health, have found that the voluntary removal of antibiotics from large-scale US poultry farms that are transitioninig to organic practices is associated with a lower prevalence of antibiotic-resistant and MDR Enterococcus. The study, recently published in the journal Environmental Health Perspectives tested for the presence of enterococci bacteria in poultry litter, feed, and water, and tested its resistance to 17 common antimicrobials.

The results were dramatic. While all farms tested positive for the presence of enterococci in poultry litter, feed, and water, the newly organic farms had a significantly lower prevalence of antibiotic-resistant enterococci. For example, 67% of Enterococcus faecalis recovered from conventional poultry farms were resistant to erythromycin, this figure was only 18% in newly organic poultry farms.

The Enterococcus family of bacteria is common in humans and animals. However an ‘overgrowth’ in vulnerable individuals is implicated in several human health conditions including urinary tract infections, bacteremia, bacterial endocarditis, diverticulitis, and meningitis.

Multi-drug resistant bacteria are of particular public health concern because they can be resistant to all available antibiotics, and are therefore very difficult to treat if contracted by an animal or human.