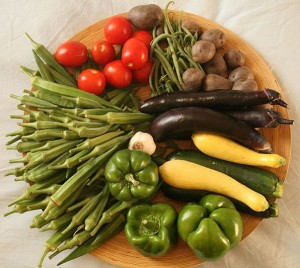 Fresh vegetables, such as those in a Mediterranean diet, can protect against birth defects [Image: thebittenword.com - Wikimedia Commons]

Diet alone may be the key to reducing birth defects

Natural Health News — Healthier dietary choices by pregnant women are associated with reduced risks of birth defects, according to a new study in the Archives of Pediatrics & Adolescent Medicine.

The researchers at Stanford University, in California, USA used data from the National Birth Defects Prevention Study to identify pregnant women from 10 US states with estimated due dates from October 1997 through December 2005.

Information about their babies’ health was collected via telephone interviews. Included in the analysis were 936 cases with neural tube defects, 2,475 with orofacial clefts, and these were compared to 6,147 other babies without birth defects.

This was compared to data on the mothers’ diets which was collected via a questionnaire. A good diet was defined as either one which was based on the Mediterranean Diet (Mediterranean Diet Score or MDS) or on the US Department of Agriculture Food Guide Pyramid.

A higher quality diet was associated with a lower risk of both neural tube defect and orofacial clefts.

Interestingly this held true even though 19% of the women smoked, 38% drank alcohol, and 16% were obese – all potential risk factors for reproductive abnormalities.

Around 78% percent took folic-acid-containing supplements during early pregnancy. However the authors state in that while folic acid supplementation and food fortification has been effective in preventing neural tube defects, folic acid does not prevent all birth defects.

“Nutrition research on birth defects has tended to focus on one nutrient (or nutritional factor) at a time,” they write. “However, the reality of nutrition is much more complex.”

“These results” say the authors, “suggest that dietary approaches could lead to further reduction in risks of major birth defects and complement

In an accompanying editorial in the same journal, David R. Jacobs, Jr, PhD, from the University of Minnesota, Minneapolis, and colleagues note that while maternal intake of folate is important for fetal development, recent studies suggest the supplemental folic acid may have adverse health effects on older adults.

He notes also that the impact of the study may have implications for the controversial requirement of blanket fortification of certain foods, which risks over supplying some individuals with certain nutrients and thereby negatively affecting their health.

“The importance of the findings of this particular study, he notes ”…lies in showing that women obtain benefit from the consumption of a high-quality diet, beyond the benefits derived through grain fortification.

This raises the question of whether a high-quality diet alone may be sufficient to prevent NTDs (neural tube defects) – a strategy that would also remove the potential harm from fortification.”

“Reduction of NTDs may be achievable by diet alone, at the same time reducing potential risk for other chronic diseases in the rest of the population.”

Fresh vegetables, such as those in a Mediterranean diet, can protect against birth defects [Image: thebittenword.com - Wikimedia Commons]