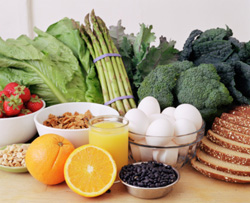 Many different foods are naturally high in folate

It has long been advised that pregnant women and those trying to conceive should ensure they get adequate folic acid, either through their diets or through supplements.

Folic acid helps prevent neural-tube birth defects (NPDs) such as spina bifida – though nobody is yet sure how or why – and today over 70 countries across the world have also introduced forms of mandatory folic acid fortification in foods.

This fortification, it is argued, helps ensure that as much of the population as possible, gets adequate amounts of daily folic acid.

It appears to have been a successful approach; when Canada, for example, introduced mandatory fortification of many cereal products, NPD prevalence decreased by 46%, from 1.58 per thousand births to 0.86.

However, a recent study from Newcastle University and the Institute of Food Research has investigated how folic acid supplements are processed in the body, as compared to the natural folates found in leafy green vegetables. Its results are particularly relevant right now in the UK as the UK government is considering mandatory fortification of bread flour with folic acid as a measure to help prevent NPDs.

The study raises some concerns about fortification. These centre around the fact that the synthetic folic acid that is used in supplements and in food fortification is not metabolised in the same way as natural dietary folates, and that there are potential health risks as a result.

This 500nmol dose is considered a “physiological dosage”, meaning that it is close to an amount that could be ingested through diet.

Around 15 minutes after receiving the dose, blood samples were taken and the researchers discovered that for the folic acid group, around 80% of it was unmodified folic acid (in other words the body had not converted it to a useful form), whilst in the 5-FormylTHF group only 4% was unconverted. The rest had been metabolised to 5-MTHF, which is the natural circulating form in the body.

According to the researchers, fortification of a substance we consume every day such as bread flour, could very well lead to unmetabolised folic acid substance circulating in the body, and this is not healthy.

For example, one risk is the possibility of vitamin B12 deficiency, common in the elderly, being masked and therefore going untreated. In older people B12 deficiency is a cause of cognitive decline.

Studies have also shown greater incidence of prostate and other cancers, as well as an increase in overall mortality, in those taking folic acid supplements.

This was a small study of patients with stable liver cirrhosis in a programme of follow-up monitoring, but its implications are interesting. It is one of several recent studies questioning whether supplements/fortification with a more natural form of folate is more desirable, for those with health challenges as well as those who are generally healthy and whether it is a better alternative for pregnant women and their babies.

Of course the form of fortification isn’t the only question.

Fortification is a contentious issue. Many nutritionists would argue that it encourages consumers to choose an inferior product instead of one that is a naturally better source of nutrients. White bread and white rice are good examples of this.

It also reduces consumer choice, is generally implemented without the fully informed consent of consumers.

Because manufacturers are entitled to make health claims for fortified foods it can lead to poor or unbalanced food choices and the increased consumption of fatty, sugary or salty fortified products. Sugary breakfast cereals are a good example of this.

Extensive use of fortification in low-income countries has also been criticised as a diversion from the longer-term task of making food supplies secure and naturally good sources of nutrients from culturally appropriate foods suited to the local climate and terrain.

Some critics object to mandatory fortification on principle, as an inappropriate ‘medicalisation’ of food supplies. Clearly fortification has both benefits and risk that need to be weighed carefully

According to the researchers behind the Newcastle study, the increased risk of NPDs associated with low folate levels during the first few months of pregnancy can be mitigated either with supplements or with dietary folates, but the authors recommend that where “fortification does happen…the forms of methyltetrahydrofolic acid (the natural form of the vitamin in food and main circulating form in the body) could be considered as an alternate fortificant to folic acid.”

But fortification isn’t the only way to get what you need.

Folate is a water-soluble B vitamin that is naturally present in many foods. Adults need around 400mcg DFE (dietary folate equivalent) per day. About half of this amount is stored in the liver and adequate levels have been shown not just to prevent NTDs but to be protective against certain cancers (such as colorectal, lung, pancreatic, oesophageal, stomach, cervical, ovarian and breast), heart disease and stroke and dementia as well.

If you are going to use a supplement look for one with a natural form of folate and remember also that B-vitamins are a complex – they work better when you get all of them together.

Folate is found naturally in a wide variety of foods, including vegetables (especially dark green leafy vegetables), fruits and fruit juices, nuts, beans, peas, dairy products, poultry and meat, eggs, seafood and grains. As the table right shows spinach, liver, yeast, asparagus, and Brussels sprouts are among the foods with the highest levels of folate.

If you want to get more dietary folate, include more of these in your diet.

Many different foods are naturally high in folate