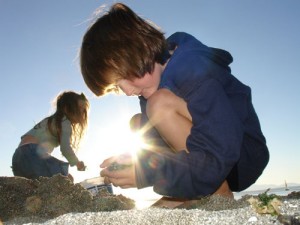 Parents who raise their children according to natural, anthroposophical values may help prevent allergies

Natural Health News — You could be forgiven for missing the significance of this study into childhood allergies.

The headline from Sweden’s prestigious Karolinska Institutet read “Few allergies in unstressed babies”. And indeed the study, published in the Journal of Allergy and Clinical Immunology showed that infants with low concentrations of the stress-related hormone cortisol in their saliva develop fewer allergies than other infants.

But what many of the headlines missed was why the infants were less stressed. The babies were part of a study into the link between an anthroposophic lifestyle and the incidence of allergies. The authors had already shown in a previous study that, in families that followed an anthroposophic lifestyle, the children had a lower risk of developing allergies in first two years of life.

The theory of the anthroposophic lifestyle was developed by Austrian scientist and philosopher Rudolf Steiner in Europe in the late 1800s. It considers health to be a combination of mind, body and spiritual balance.

Followers are appreciative of each other’s individuality and uniqueness, are careful about what they eat (for instance avoiding fast, or junk foods), tend to use alternative medicines such as homoeopathy, herbs and flower remedies as a first line of treatment and may also make different choices about birth, for instance preferring home birth over hospital birth, and encourage breastfeeding.

It is the combination of these and other practices that is likely to be the relevant factor in reducing allergies in children.

Although the group of children in this study was relatively small (330) this is not the first time that the anthroposophic lifestyle has been linked to a lower incidence of allergies.

In 2006 another study published in the Journal of Allergy & Clinical Immunology involving more than 6,600 children, ages 5 to 13, from five European countries, researchers compared the Steiner school children with their non-Steiner counterparts who lived in the same region.

What they found was that certain features of the anthroposophic lifestyle, such as restrictive use of antibiotics and drugs like paracetamol to lower fever, reduced the risk of allergic disease in children. The children in this study were taken from a larger group as part of what is known as the PARSIFAL (Prevention of Allergy – Risk Factors for Sensitization Related to Farming and Anthroposophic Lifestyle) study.

Building on past research

A larger study from the PARSIFAL group, also published in 2006 and involving 14,893 children found that those growing up on a farm were less likely to suffer from rhinoconjunctivitis, wheezing, atopic eczema and asthma and sensitisation. This finding is in line with the hygiene hypothesis which broadly says that early exposure to the sort of  ‘dirt and germs’ most parents are told is ‘bad’ is actually protective because it helps the body build immunity.

An even earlier study published in the Lancet in 1999 compared children in Steiner Schools to non-Steiner children for atopic allergies. The researchers found several significant differences between the way the children’s health had been managed.

Fermented vegetables, containing live lactobacilli, were consumed by 63% of the children at Steiner schools, compared with 4.5% at the control schools.

Skin-prick tests and blood tests showed that the children from Steiner schools had lower prevalence of atopic allergies than controls.

Parents often feel helpless to protect their children from chronic problems such as allergies. What these studies show is that, whether or not one identifies with Steiner’s philosophy, lifestyle choices within every parent’s control can make a difference.

Parents who raise their children according to natural, anthroposophical values may help prevent allergies