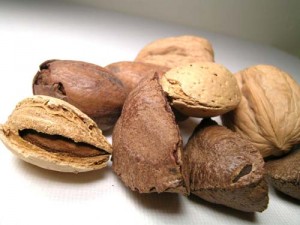 Nuts are a rich and tasty source of dietary magnesium [Image: d_jeltovski - Morguefile]

Natural Health News — People who eat more magnesium-rich foods reduce their risk of having a stroke, according to a new study.

Swedish scientists from the Karolinska Institute reviewed data from seven previously published studies of magnesium intake and stroke. These studies were done between 1998 and 2011, and included more than 240,000 people.

In these studies, people aged 34 and older were followed from eight to 15 years. The average daily magnesium intake of all the people studied  ranged from 242mg a day to 471 mg.

The research published in the The American Journal of Clinical Nutrition  showed that people who had higher amounts of magnesium in their diets had a lower risk for stroke.

This was true even when the scientists took into account multiple other factors that may have confounded the results, such as blood pressure, diabetes, age, smoking, high cholesterol, exercise, diet and supplement use, alcohol consumption and family history of heart disease.

The link between magnesium in the diet and stroke risk was strongest for ischemic stroke (i.e. when a clot blocks a blood vessel in the brain) the most common type of stroke in older people. The risk of this type of stroke was reduced by 9% for each additional 100 milligrams of magnesium a person consumed each day.

Overall the data showed that for every 100 additional milligrams of magnesium per day, people cut their risk of any kind of stroke by 8%.

The researchers suggest that the reduced risk of stroke may be related to the way magnesium helps to lower blood pressure.

Diets high in magnesium have also been linked with lower rates of type 2 diabetes, another risk factor for stroke.

An editorial comment on the study encourages people at high risk for stroke to include more high-magnesium foods in their diets and calls for more clarity on whether taking magnesium supplements can also reduce stroke risk.

Foods that supply close to 100 milligrams of magnesium a day include one ounce of almonds or cashews, one cup of beans or brown rice, three-quarters of a cup of cooked spinach, or one cup of cooked oat bran cereal.

Nuts are a rich and tasty source of dietary magnesium [Image: d_jeltovski - Morguefile]