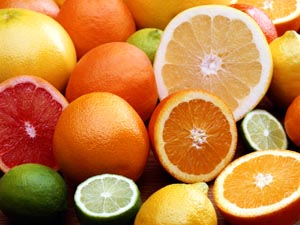 Citrus fruits are a good dietary source of vitamin C, along with foods like papaya, peppers, broccoli and strawberries

Natural Health News — Getting enough vitamin C may reduce your risk of the most common type of haemorrhagic stroke, according to a new study.

Vitamin C is abundant in fruits and vegetables such as oranges, papaya, peppers, broccoli and strawberries. It is also available in supplement form. Haemorrhagic stroke is less common than ischaemic stroke, but is more often deadly.

The results of this small study have been released prior to publication, and are due to be presented at the upcoming American Academy of Neurology’s 66th Annual Meeting in Philadelphia.

To understand the effects of Vitamin C the  researchers compared 65 people who had experienced an intracerebral heamorrhagic stroke, or a blood vessel rupture inside the brain to 65 healthy people.

“Our results show that vitamin C deficiency should be considered a risk factor for this severe type of stroke, as were high blood pressure, drinking alcohol and being overweight in our study,” said study author Stéphane Vannier, MD, with Pontchaillou University Hospital in Rennes, France.

“More research is needed to explore specifically how vitamin C may help to reduce stroke risk. For example, the vitamin may regulate blood pressure.”

Vannier adds that vitamin C appears to have other benefits like creating collagen, a protein found in bones, skin and tissues.Vitamin C deficiency has also been linked to heart disease.

In 2013 a meta-analysis showed that as blood levels of vitamin C went up, stroke risk dropped; those with the highest levels had around a 38% reduced risk of stroke. A 2008 University of Cambridge study found people with high blood levels of vitamin C reduced their stroke risk by 42%. A similar study in the British Medical Journal in 1995 indicated elderly people with low levels of the vitamin had a greater risk of stroke.

This research add to the long list of benefits from adequate vitamin C including its ability to support immunity. The body cannot make vitaamin C and so we need to get it from our diets every day. Recommended doses for adult men and women are 90 and 75 milligrams (mg) per day, respectively, though women need more during pregnancy and breastfeeding.

Citrus fruits are a good dietary source of vitamin C, along with foods like papaya, peppers, broccoli and strawberries