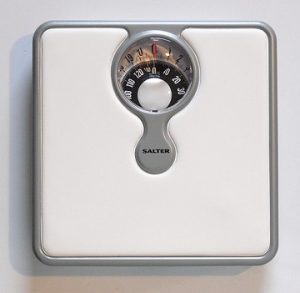 Sleep debt, stress and even the colour of your dishes may contribute to overeating and weight gain, say scientists. [Photo: Wikimedia Commons]

Weighing up the causes of obesity – it’s more than calories

Natural Health News — More challenging research is emerging about what influences weight gain and the tendency to overeat.

Three new studies shed a fascinating light on what causes us to overeat.

In the first, published in the journal Medical Hypothesis, Norwegian researchers at the University of Stavanger suggest that diet and lack of exercise are not sufficient to explain the worldwide rise in obesity. Stress is one of many other factors which could contribute.

The scientists reviewed a number of studies, which show that levels of the stress hormone cortisol are noticeably higher in people who are overweight.

“If you have high cortisol, you seem to put on weight more easily,” says co author, biologist Brynjar Foss. He suggests that stress and obesity reinforce each other through what is known as positive feedback.

“When you go up in weight, your body also comes under stress. That probably has a self-reinforcing effect – so you get even fatter,” he explains.

But dieting can also stimulate cortisol production, which in turn may trigger the stress response and thereby counter the weight loss.

In another small study, published in the Journal of Clinical Endocrinology & Metabolism, Swedish researchers at Uppsala University have demonstrated that that a specific brain region that controls our desire to eat becomes more responsive to images of food after one night of sleep loss than after one night of normal sleep. Poor sleep habits, they say, could affect people’s risk of becoming overweight in the long run.

Previous evidence, published in the Archives of Internal Medicine also suggest sleep debt is an important factor in begin overweight. An editorial accompanying that study calls lack of sleep the “unexpected ‘obesity villain'” that few in the general public or medical profession have yet to understand.

Finally consider the colour of your tableware. According to a study in the Journal of Consumer Research choosing the right size and colour of your bowls and plates could help you eat less.

“The bigger your dinnerware, the bigger your portion. If you use larger plates, you could end up serving 9% to 31% more than you typically would,” according to a collaborative study by Georgia Institute of Technology and Cornell University.

The average size of dinner plates has increased by almost 23% from since 1900, the authors point out, and eating only 50 more calories a day could result in a five-pound weight gain each year.

In one lab experiment, the researchers asked 225 people to pour a specified amount of tomato soup into one of seven different sized bowls: three smaller, three larger, and one control bowl. Participants served themselves less than the target serving size of soup into the smaller bowls, but put more into the larger bowls.

Further experiments showed that the “bowl bias” is nearly impossible to eliminate even with education, awareness, or practice. During two follow up studies larger bowls led people to overserve up to 31 percent more than normal.

Change the colour of your dishes!

Hot on the heels of the documentary Programmed to be Fat?  these studies suggest we must take a more holistic approach to weight management in order to truly help ourselves and others find and maintain a healthy weight.

Sleep debt, stress and even the colour of your dishes may contribute to overeating and weight gain, say scientists. [Photo: Wikimedia Commons]