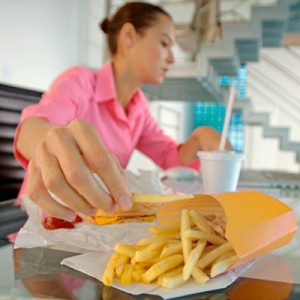 Stress makes the health effects of bad food even worse

Natural Health News — Highly stressed people who eat a lot of high-fat, high-sugar food are more prone to health risks than low-stress people who eat the same amount of unhealthy food,  according to new research.

For the study, published online in the journal Psychoneuroendocrinology, researchers from the University of California at San Francisco (UCSF) spent a year studying a group of 61 healthy women; 33 were chronically stressed women caring for a spouse or parent with dementia, and 28 were women with low stress.

“Chronic stress can play an important role in influencing biology, and it’s critical to understand the exact pathways through which it works.” said Kirstin Aschbacher, PhD, an assistant professor in the UCSF Department of Psychiatry and lead author.

When a calorie isn’t just a calorie

“Many people think a calorie is a calorie, but this study suggests that two women who eat the same thing could have different metabolic responses based on their level of stress. There appears to be a stress pathway that works through diet – for example, it could be similar to what we see in animals, where fat cells grow faster in response to junk food when the body is chronically stressed.”

The researchers evaluated key biological markers associated with elevated metabolic risk including waistline measurements, assessments of abdominal fat deposits. They also tested participants’ insulin resistance – a key driver of metabolic syndrome – and used blood tests to measure levels of hormones and a blood test to measure stress hormones and oxidative (free radical) damage to lipids and cell RNA, a marker that has predicted higher rates of death from diabetes.

Oxidative damage of the genome is also an important outcome because it is one factor that can contribute to faster cellular ageing.

The devastating impact of stress

What they found was that more frequent high-fat, high-sugar consumption with a larger waistline, more abdominal fat, higher oxidative damage, and more insulin resistance, but only among the group of women exposed to chronic stress,”

Based on what is known from animal studies, stress triggers greater peripheral NPY which, in combination with junk food, creates larger abdominal fat cells, and these cells may be more prone to metabolic dysregulation.

While this stress-junk food pathway has been well mapped out with rodents and primates, this study is the first to suggest the same pathways may be at work in chronically stressed humans, according to the researchers.

“Diet appears to be a critical variable that can either amplify or protect against the metabolic effects of stress,” said senior author Elissa Epel, ” but we still don’t know the details of how much it takes.” Their next study, she says, will specifically feed high stress people a consistently high sugar diet and monitor its effects.

More studies on the way

Metabolic syndrome is a cluster of abnormalities – increased blood pressure, a high blood sugar level, excess body fat around the waist and abnormal cholesterol levels – that occur together, increasing a person’s risk of heart disease, stroke and diabetes.

“The medical community is starting to appreciate how important chronic stress is in promoting and worsening early disease processes,” said Aschbacher. “But there are no guidelines for ‘treating’ chronic stress. We need treatment studies to understand whether increasing stress resilience could reduce the metabolic syndrome, obesity or diabetes.”