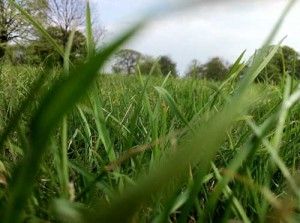 Looking at something green for just a few seconds can boost creativity [Image: Pat Thomas]

In a creative slump? Gaze at something green!

Natural Health News — Going green really is good for you, especially if you feel like you are feeling a bit jaded and lacking in creativity.

German researchers found that when people glanced at the colour green for two seconds before doing a creative task, it boosted their creative output compared to briefly looking at other colours, including white, grey, red, and blue.

In the study, which is published in the journal Personality and Social Psychology Bulletin, scientists gave 69 men and women two minutes to write down as many uses as possible for a tin can. Their ideas were then rated for creativity and cleverness.

Before beginning the creativity test, half were shown a green rectangle and the other half saw a white rectangle.

Participants who saw green before the task produced more creative ideas than those who saw white. The “green effect” as the researchers dubbed it, was also observed in creativity challenges that pitted the colour against those seeing a quick flash of grey, red, or blue.

Lead author Dr. Stephanie Lichtenfeld explains that the link between green and creativity is that it’s an unconscious signal of growth. Not only physical growth as in growing plants, but also psychological growth.

“Green may serve as a cue that evokes the motivation to strive for improvement and task mastery, which in turn may facilitate growth,” says Lichtenfeld, an assistant professor of psychology at Ludwig-Maximilians-University in Munich, Germany.

“The effect seems to be subtle,” points out Lichtenfeld. The intentional use of green as a means of being creative remains an open question, she explains.

The green shown in the experiments matched the shade seen in nature, in growing plants or in a meadow. Since this was the first study to find a link between green and creativity, it’s unclear whether lime green or blue-green, for instance, may also fuel inventiveness.

However, other studies have shown that time spent in nature – for instanced taking a bit of ‘green exercise‘ as suggested in a previous article – can have a deeply restorative effect on body and mind.

Looking at something green for just a few seconds can boost creativity [Image: Pat Thomas]