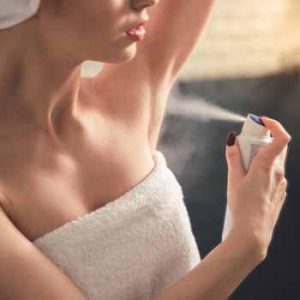 Using a deodorant or anti-perspirant rearranges the ecosystem of your skin. [Photo: Bigstock]

Natural Health News — Wearing antiperspirant or deodorant doesn’t just affect your social life, it substantially changes the microbial life that lives on you.

A small but fascinating study from the US finds that antiperspirant and deodorant can significantly influence both the type and quantity of bacterial life found in the human armpit’s “microbiome.”

Skin is naturally home to many different types of bacteria and as research into the skin ‘microbiome’ advances, it is thought that a wide range of skin disorders such as atopic dermatitis, acne, skin ulcers, rosacea, perioral dermatitis, psoriasis, seborrhoea and seborrheic dermatitis may be caused or made worse by “dysbiosis”, an imbalance in the microbial community.

» Human skin is home to thousands of different kinds of bacteria. The balance of bacterial species is part of what keeps skin healthy.

» Although many of us use deodorants and antiperspirants every day, there is little research to suggest how these products might help or hinder the skin microbiome under the arms.

» By studying the armpit microbiome of volunteers over several days scientists were able to show that while deodorant/antiperspirant users have fewer odour-producing bacteria, they also have a significantly higher number of potentially unfriendly bacteria on underarm skin then those who don’t use either kind of product.

“We wanted to understand what effect antiperspirant and deodorant have on the microbial life that lives on our bodies, and how our daily habits influence the life that lives on us,” says Julie Horvath, head of the genomics and microbiology research laboratory at the North Carolina Museum of Natural Sciences, an associate research professor at North Carolina Central University, and lead author the work published in the journal PeerJ.

Within the last century, use of underarm products has become routine for many people and yet what these products do to our skin and our health has not been given much consideration.

They then launched an eight-day experiment, in which all of the participants had swabs taken of their armpits between 11 a.m. and 1 p.m.

The researchers then cultured all the samples to determine the abundance of microbial organisms growing on each participant and how that differed day to day.

By the third day, participants who had used antiperspirant were beginning to see more microbial growth. And by day six, the amount of bacteria for all study participants was fairly comparable.

“However, once all participants began using antiperspirant on days seven and eight, we found very few microbes on any of the participants, verifying that these products dramatically reduce microbial growth,” Horvath notes.

Changing the ecosystem of your skin

The researchers also did genetic sequencing on all of the samples from days three and six, to determine how antiperspirant and deodorant might affect the microbial biodiversity – the composition and variety of types of bacteria – over time. 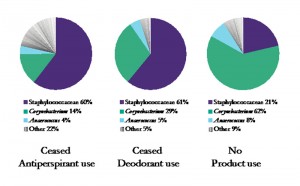 They found that, among study participants who hadn’t worn deodorant or antiperspirant, 62% of the microbes they found were Corynebacteria, followed by various Staphylococcaceae bacteria (21%), with a random assortment of other bacteria accounting for less than 10%.

Corynebacteria are partially responsible for producing the bad smells we associate with body odour, but they are also thought to help us defend against pathogens. Staphylococcaceae are a diverse group of bacteria that are among the most common microbes found on human skin and, while most are considered beneficial, some can pose a risk to human health.

The participants who had been regular antiperspirant users coming into the study had wildly different results: 60% of their microbes were Staphylococcaceae, only 14% were Corynebacteria, and more than 20% were filed under “other” – meaning they were a grab-bag of opportunistic bacteria.

The new findings also highlight how human behaviour can have a profound, if unintended, impact on the evolution of microbial organisms.

“Using antiperspirant and deodorant completely rearranges the microbial ecosystem of your skin – what’s living on us and in what amounts,” Horvath says. “And we have no idea what effect, if any, that has on our skin and on our health. Is it beneficial? Is it detrimental? We really don’t know at this point. Those are questions that we’re potentially interested in exploring.”

Using a deodorant or anti-perspirant rearranges the ecosystem of your skin. [Photo: Bigstock]