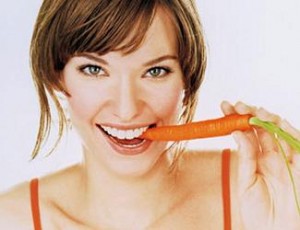 The secret to a sexy, healthy glow, say researchers, lies in eating your five-a-day

An intriguing study recently published in the Quarterly Journal of Experimental Psychology sheds new light on the importance of skin colour as a determiner of facial attractiveness. It also shows that colour derived from getting plenty of carotenoids has the upper hand over melanisation (tanning) when it comes to the rules of attraction.

What puts colour in your face?

“Skin colouration can arise as a result of two distinct processes,” explain the team leading the research: through tanning (melanisation) or the assimilation of fruit and vegetables (carotenoid ingestion).

While it is known that red and yellow pigments found in bright fruit and vegetables increase skin yellowness, previous studies have shown that “carotenoid colouration” is a more important factor in healthy appearance than melanin colouration,” says the research team, which has published other work on the link between vegetable consumption and skin tone.

Determined to investigate the importance of skin colour in perceptions of facial attractiveness, as well as mate choices, in three separate, yet linked, Internet-based studies, the British researchers set out to examine the importance of high levels of these pigments (carotenoids and melanin) in attraction choices.

Establishing the preference for one pigment over the other in judging the appeal of a face was also crucial to the research.

Putting some colour in your face

In the first two studies, two separate groups of 60 participants were shown 27 base faces, specifically created for the purpose of testing. Through colour manipulation, the skin area of these composite faces was altered alongside the axis of carotenoid or melanin-associated derma colours.

High and low pigment versions of each face were shown in pairs to the partakers, who had to indicate which one they thought more attractive. Results from both studies showed a clear preference for strong color values; 86% of the attendants to the first study voted for the high carotenoid version, while 78.5% of the participants to the second one opted for the high melanin variant.

In a third and final study, the team pitted 24 high carotenoid and high melanin faces against each other, asking participants to choose the more appealing ones; results showed a 75.9% preference for carotenoid colouring over the melanin one.

Carotenoids are a group of yellow, red, and orange pigments, the most well known of which is arguably beta-carotene.  They are the precursors of Vitamin A in the body and we generally get around half of our vitamin A in this form

Eating high caroteniod foods, of course, has other advantages beyond being attractive. Thee include heart disease and cancer protection, healthier sperm, stronger bones and even protection against dementia.

Good dietary sources of beta-carotene include:

The more intense the colour of a fruit or vegetable, the higher its beta-carotene content.

The secret to a sexy, healthy glow, say researchers, lies in eating your five-a-day