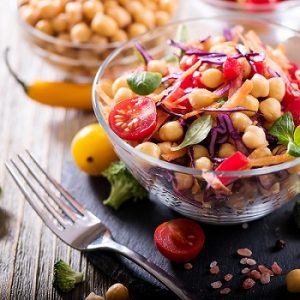 Natural Health News — A diet comprised of a higher ratio of plant-based foods compared to animal-based foods could provide substantial protection against obesity, according to Spanish researchers.

The observational study, presented at the recent European Congress on Obesity in Portugal, found that people who ate a ‘pro-vegetarian’ or flexitarian diet – rich in food coming from plant sources like vegetables, fruit and grains – cut their risk of developing obesity by almost half compared to those whose diet was rich in animal food like meat, and animal fats.

Current evidence suggests that such a pro-vegetarian diet has a protective role in cardiovascular disease and diabetes, but little is known about its role on the risk of developing obesity in healthy populations.

The study carried out at the University of Navarra examined the association between varying levels of plants in the diet and the incidence of obesity (body mass index; BMI >30) in over 16,000 healthy, non-obese adults over a period of 10 years.

» A diet comprised mostly of plant-based foods, with only occasional meat or fish, is known to have many health benefits.

» Most recently Spanish researchers have found it can cut the risk of becoming obese by almost half.

» In a related study, US researchers have found that a diet where most of the protein comes from plant foods can protect women from early menopause.

Half the risk of obesity

Participants were part of a larger study tracking the health of Spanish graduates since 1999. Detailed questionnaires filled out at the beginning of the study helped researchers classify participants into one of five groups from the 20% with the least pro-vegetarian diet  to the 20% with the most.

During follow-up, 584 participants became obese. The researchers found that participants who closely followed a pro-vegetarian diet were less likely to become obese.

Compared to the least-vegetarian participants, the most vegetarian had a 43% reduced risk of developing obesity. For the groups in between the likelihood of becoming obese rose stepwise according to the amount of meat in the diet.

The authors conclude: “Our study suggests that plant-based diets are associated with substantially lower risk of developing obesity. This supports current recommendations to shift to diets rich in plant foods, with lower intake of animal foods.”

And protection from early menopause

In a related observational study form the University of Massachusetts Amherst and Harvard T.H. Chan School of Public Health researchers found that long-term, high intake of vegetable protein – for instance whole grains, soya and tofu – could protect women from early menopause and could prolong reproductive function.

No similar protective effect was observed in those eating animal sources of protein.

Early menopause, the cessation of ovarian function before age 45, affects about 10% of women and is associated with higher risk of cardiovascular disease, osteoporosis and early cognitive decline. Few studies have evaluated how protein intake is associated with menopause timing and, the authors claim, this is the first to look specifically at early menopause.

“A better understanding of how dietary vegetable protein intake is associated with ovarian aging may identify ways for women to modify their risk of early onset menopause and associated health conditions,” write first author and then-graduate student Maegan Boutot, with her advisor, Professor Elizabeth Bertone-Johnson.

Details of the study, which involved 116,000 women appear in the American Journal of Epidemiology.