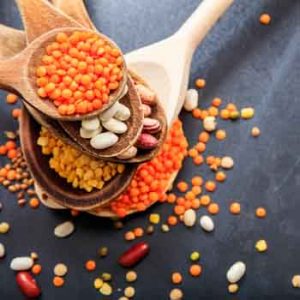 Pulses are a great vegetable-based source of protein. [Photo: Bigstock]

Natural Health News — The largest study to examine the effects of different sources of dietary protein found that a high intake of proteins from animal sources – particularly processed and unprocessed red meats – was associated with a higher mortality rate, while a high intake of protein from plant sources was associated with a lower risk of early death.

Previous studies have promoted vegetarian diets for their health benefits, while others have cautioned against meat consumption for potential health risks.

Recent studies for example, suggests that a vegetarian diet could lower the risk of colorectal cancer and type-2 diabetes while other evidence suggests that higher red meat consumption (as opposed to poultry, fish, eggs, or dairy products) is linked to kidney failure.

» US researchers, analysing more than 30 years of data have found that, when it comes to early death from most causes, the source of protein in your diet can either be harmful or protective.

» In general their findings shows that animal source protein raised the risk of early death , especially in those with other lifestyle risks such as smoking of high alcohol consumption, whereas higher vegetable source protein in the diet could be protective in these people.

» Overall substituting vegetable-based sources of protein for animal-based ones was linked with a lower risk of death from all causes.

The current study which analyses more than 30 years of data from two large US studies, focuses on the types of protein we eat and its impact on health.

The researchers looked at the rates of death from all causes as well as form specific diseases, and at influential aspects of lifestyle and compared these to the participants’ diets.

This increased risk of death linked to eating more animal protein was more conclusive among those who were obese and those who drank larger quantities of alcohol.

Again, the link between eating more plant protein and lower risk of death was stronger among those with lifestyle risk factors such as smoking and drinking  or if they were overweight and /or physically inactive. Higher intake of plant protein was also more protective in people age 65+.

But the analysis also showed that not all proteins are created equal.

“Although substituting plant foods for various animal foods was associated with a lower mortality, red meat, especially processed red meat, showed a much stronger association than fish and poultry, which themselves were not associated with mortality” say the scientists.

They add that, “protein from certain fish, such as cod, has been suggested to improve the lipid profile, glycaemic control, and insulin sensitivity.”

The researchers also discovered that substituting just 3% of calories from animal protein with plant protein was linked with a lower risk of death from all causes.

One good source of vegetable protein is pulses. Indeed 2016 is the International Year of Pulses, focussing on the health and environmental reasons for eating more pulses. Whereas recent evidence suggests that our continued high intake of meat is contirbuting to obesity, other evidence shows that adding healthy yellow peas, chickpeas, navy beans and lentils to your diet can significantly reduce your risk of metabolic syndrome.

Many fo us are not yet in the habit of substituting plant for animal protein. However, the authors of the current study conclude: “Substitution of plant protein for animal protein, especially from processed red meat, may confer substantial health benefit. Therefore, public health recommendations should focus on improvement of protein sources.”

Pulses are a great vegetable-based source of protein. [Photo: Bigstock]