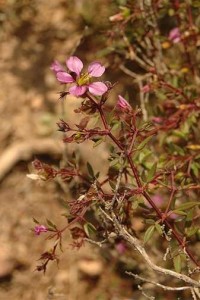 Natural Health News — Extracts from a plant native to the arid, desert regions of Pakistan, India, Africa and parts of the Mediterranean may hold the key to fighting breast cancer.

Forty years ago doctors in Pakistan started using the herbal tea, brewed from the plant known as Virgin’s Mantle (Fagonia cretica), to treat breast cancer patients, but up until now this treatment has been regarded as something of a folklore remedy. Reports suggest the plant extract does not trigger any serious side effects such as loss of hair, drop in blood count or diarrhoea.

Now, in a laboratory study scientists at Aston University in Birmingham and Russell’s Hall Hospital in Dudley have demonstrated that it kills cancer cells without damage to normal breast cells. Their findings have been release ahead of publication in a medical journal.

According to the scientists, 50% of cancers are caused by failures in the regulation of the cell cycle, a cycle that starts with the formation of cells and ends with its apoptosis, or programmed cell death. The regulation of this cell cycle is achieved by a protein called p53 (name assigned by its molecular mass). The p53 protein is a natural tumour suppressor and it is in charge of ordering the human cells when they come to the end of their natural cycle.

There are many reasons, such as DNA damage, why this cycle may go haywire or fail. When this happens the tumour cells that were suppose to die, continue growing, resulting in either benign or malignant tumours.

The research, published in the science journal PloS One, found the plant extract had a novel mechanism which could remedy defects in cell DNA that would normally resist tumour growth.

Research still in its infancy

Professor Helen Griffith of Aston University said, “More research is needed to establish the role of the extract in cancer management and it now needs to be demonstrated that this extract is as effective in killing cancer cells inside the body as it is within laboratory. The next steps are to identify which element of the plant is responsible for killing the cancer cells with a view to eventually begin trails with human cancer patients.”

Dr Caitlin Palframan, policy manager at Breakthrough Breast Cancer said, “Some of the most important cancer-fighting drugs are originally derived from plants. As this research is at the very earliest stage we won’t know for quite some time whether drugs derived from this plant will be effective in treating breast cancer but we look forward to seeing any progress.”