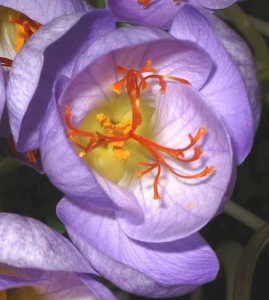 Saffron, a spice derived from the saffron crocus, may be a natural treatment for age-related macular degeneration. [Image: Velela - Wikimedia Commons]

Natural Health News — An oral supplement of saffron – the precious spice best known for flavouring curries – may be the natural answer to vision loss from macular degeneration.

The small study involved 29 people aged 55-85 years, in the early stages of  age-related macular degeneration (AMD). The patients, who were already showing signs of vision loss were given 20 mg of saffron a day over an average period of 14 months.

After three months all the patients showed a significant implementation retinal function resulting in an overall improvement in visual acuity. The effects, however, disappeared when patients stopped taking the saffron pills. No adverse side effects were noticed.

The study was published in the journal Evidence-Based Complementary and Alternative Medicine.

Saffron contains the carotenoids crocin and crocetin, which have been shown to have strong protective effects on retinal cells, helping restore function and structure of retinal cells damaged by oxidative stress and AMD.

In particular crocin has been shown to have antioxidant activity stronger than alpha-tocopherol, and can prevent eye damage from free radicals.

The earliest report on the benefits of saffron and its main active constituent crocin in treating AMD was published in 1999 and suggested that crocin and its related compounds significantly increased blood flow in the retina and choroid, and thus can prevent cell death. The authors concluded that saffron was a useful treatment in cases of ischemic retinopathy and/or age-related macular degeneration.

Constituents in saffron also protect eyes from the damaging effects of bright light, which can damage the macula. Studies show that long-term exposure to bright lights can lead to photoreceptor degeneration, and thus speed the progress of AMD.

Laboratory and animal studies, however, show that the carotenoid crocin has a protective effect against light damage, helping to maintain the healthy function of photoreceptors in the eye.

Crocetin, which is another carotenoid in saffron, has also shown promise in inhibiting photoreceptor degeneration and retinal dysfunction.

Saffron is derived from derived from the flower of Crocus sativus, commonly known as the saffron crocus. It is one of the world’s most expensive spices because the stigmas of each flower need to be collected by hand and there are only a few per flower.

The carotenoid crocin is also responsible for the deep golden yellow colour that saffron imparts to food. Throughout history it has been used medicinally and as a textile dye, as well as in religious ceremonies, in flower waters, perfumes and pot-pourris, and ointments.

Ninety percent of the world’s supply of saffron comes from Iran.

Saffron, a spice derived from the saffron crocus, may be a natural treatment for age-related macular degeneration. [Image: Velela - Wikimedia Commons]