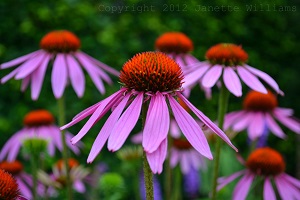 Echinacea/elderberry combo as effective as Tamiflu for influenza

Natural Health News — New research suggests that a combination of echinacea herb and root extract with elderberry is as effective as the conventional antiviral medicine Tamiflu in the early treatment of influenza.

For the study researchers recruited 473 patients who had exhibited flu symptoms for less than 48 hours from 29 primary care practices in the Czech Republic. The patients were randomly assigned to take Echinaforce® Hotdrink syrup – a beverage containing an alcoholic extract prepared from freshly harvested echinacea (Echinacea purpurea) herb and root (95% herb; 5% root) supplemented with European elderberry (Sambucus nigra), for 10 days, or oseltamivir (Tamiflu) for five days followed by placebo for five days.

» Czech researchers compared the medicinal effect of an echinacea root/herb and elderberry combination against the conventional flue remedy Tamiflu in two groups.

» Results showed that after 10 days recovery was similar in both groups,

» Incidence of side-effects was low in both groups – though those taking the Tamiflu were more likely to experience gastrointestinal issues such as nausea and vomiting.

No difference between treatments

Statistical analyses revealed that the two treatments worked equally well even in a subgroup of patients with laboratory-confirmed influenza (as opposed to those with a diagnosis of flu based on symptoms alone). There was even a small trend towards a higher proportion of recovered patients after 10 days of treatment with Echinaforce Hotdrink.

There were also no statistically significant differences between groups in terms of antibiotic use, intermediate doctor visits, use of over-the-counter medications for symptoms, “ability to return to normal daily activities,” or physician- and patient-reported efficacy of the treatments.

“The size of this trial — 473 patients — is one of the largest echinacea clinical trials ever published,” said Mark Blumenthal, founder and executive director of the American Botanical Council, a leading nonprofit research and education organization, who noted that the largest echinacea clinical trial in the scientific literature — with 755 subjects — was conducted with the same Echinaforce extract, and showed a preventive effect against respiratory tract infections.

The over-the-counter  availability of remedies like Echinaforce allows for a very early treatment start, which is central for treatment success with any intervention say the researchers.