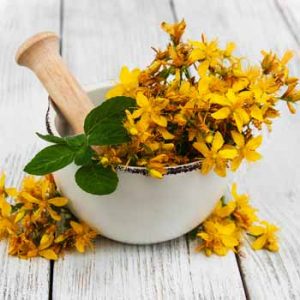 What does this mean for St John’s wort users?

Eight products in total, produced by ASDA, Superdrug and HRI Good Mood, were the subject of a “precautionary recall” because they had levels of toxic pyrrolizidine alkaloids (PAs) above the threshold recommended by the Committee on Herbal Medicinal Products (HMPC), a European expert body.

If you’ve never heard of PAs before here is some information.

About 3% of flowering plants contain a group of chemical compounds called pyrrolizidine alkaloids (PAs); they are part of the plant’s natural defence against insects. Comfrey, coltsfoot, borage, butterbur and ragwort have all been identified as having particularly high levels of PAs.

Where the contamination begins

It’s important to understand that PAs are not found in St John’s Wort plant itself. The contamination is likely to be the result of accidental collection of local weeds – probably ragwort – during harvesting.

This kind of harvesting contamination isn’t just a problem with St John’s wort, other herbs can be affected. Good agricultural and collection practices, as defined by the World Health Organization, are the best way to avoid this kind of contamination.

» As PAs ingested in high concentrations over a long period are toxic to the liver this is a sensible precaution.

» PAs are present in around 3% of all flowering plants and can be found in both medicinal herbs, foods and animal feeds. Levels vary widely due to a variety of factors.

» If you are a St John’s wort user, you should look for products that guarantee to be PA free or consider using whole dried herbs and tinctures to reduce your potential exposure.

According to the European Medicines Agency PAs occur in nature in more than 6,000 plants. The amount of PAs in plants can vary greatly depending upon the botanical species and variety, growing conditions, plant part and time of harvest.

Storage and processing also have an influence. It is thought, for instance that mature and dried comfrey leaves, harvested at particular times of year contain very little if any PAs. According to a report from the European Food Safety Authority, in animal feed containing alpine ragwort PA levels can drop during storage in a silo due to fermentation.

Occasional, small amounts of PAs are likely harmless to the body. But large oral doses taken or for extended periods of time PAs can cause liver problems in humans. Symptoms of liver disorders include yellowing of the whites of the eyes and/or skin, nausea, vomiting, dark urine, abdominal pain and unusual tiredness.

In both medicinals and food

Recent surveys have shown that human exposure to PAs can occur through a number of routes including herbal preparations and medicinal teas, cereals and grains (for both human and animal consumption), honey, food supplements and salad leaves, and carryover into milk. However, unlike those for herbs and medicines, there is no international regulation of PAs in food.

At the same time, safety thresholds have been lowered meaning that more products could be considered potentially toxic.

Research suggests that St John’s wort works in a similar manner to standard antidepressants, but with far fewer reported side effects. As such it is a popular choice for those who wish to manage their symptoms more naturally.

All St John’s wort products in the UK are licensed through the MHRA. This license is given on the basis that the herbal medicine is safe to an acceptable standard, provided it is used according to the instructions on the packaging.

Interestingly the European Medicine Authority notes in its report that while several incidence of toxicity have been cited in the scientific literature “there are no substantial, long-term follow-up data to assess whether exposure to toxic, unsaturated PAs results in increased incidence of chronic liver disease or cancer in man.”

Nevertheless it is sensible to keep exposure to PAs as low as practically achievable. The real concern here is with oral preparations. Children, the elderly and those with liver disease are more easily harmed by PAs, and the fetus is particularly susceptible.

There is little evidence to show that PAs are significantly absorbed from dermal applications, but again if in doubt the cautions for vulnerable people apply.

PAs can also be removed by manufacturers using a chemical-free process (ion exchange) which removes nothing from the extract but the PAs and 2-3% of its minerals. The quality of these PA-free extracts is not compromised by this process. It’s worth looking for label information on comfrey, coltsfoot, butterbur extracts that say the product is PA-free (i.e. contain less than 1 ppm of PAs).

If you use St John’s wort, as with most herbal medicinals, there is an argument that you get what you pay for. Seek quality dried whole herb or tinctures, to reduce the chance of adulteration.