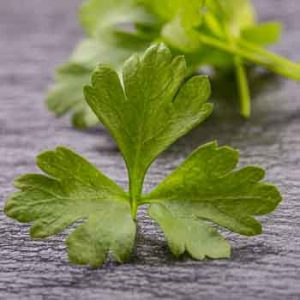 Apigenin, a flavonoid found in herbs like parsley, can keep your brain healthy. [Photo: Bigstock]

Natural Health News — New research has shown that apigenin, a naturally occurring substance found in herbs and some vegetables improves neuron formation and strengthens the connections between brain cells.

Previous experiments with animals had already shown that substances from the same chemical group as apigenin, known as flavonoids, positively affect memory and learning. Many highlight the potential of flavonoids to preserve and enhance brain function as well.

While the effectiveness of flavonoids for brain health is not an entirely new concept, this research is the first to show the positive effects of apigenin – which is found in foods like parsley, thyme, chamomile and red pepper – directly on human cells and is the first to unravel its mechanism.

» Research into antioxidant flavonoid compounds has shown that they can have a positive effect on brain health and function.

» In a new laboratory study the compound apigenin, found in foods like parsley, thyme, chamomile and red pepper, has been shown to build and strengthen connections between brain cells

» The Brazilian researchers speculate that not only could this discovery lead to new treatments, but that a diet rich in flavonoids like apigenin could help keep the brain healthy.

The scientists observed that just by applying apigenin to human stem cells in the laboratory they become neurons after 25 days – something that would not happen without the substance. Moreover, the neurons that were formed made stronger and sophisticated connections among themselves after being treated with this natural compound.

The Brazilian research team demonstrated that apigenin works by binding to estrogen receptors, which affect the development, maturation, function, and plasticity of the nervous system.

Estrogens are known to delay the onset of psychiatric and neurodegenerative disorders such as schizophrenia, depression, Alzheimer’s and Parkinson’s disease. However, the use of estrogen-based therapies is limited by the increased risk of estrogen-dependent tumors and cardiovascular problems.

Researchers believe apigenin can be used as an alternative approach on future treatments for neurodegenerative diseases such as Alzheimer’s and Parkinson’s as well as conditions like schizophrenia and depression.

“We show a new path for new studies with this substance,” points out Rehen. “Moreover, flavonoids are present at high amounts in some foods and we can speculate that a diet rich in flavonoids may influence the formation of neurons and the way they communicate within the brain.”

Apigenin, a flavonoid found in herbs like parsley, can keep your brain healthy. [Photo: Bigstock]