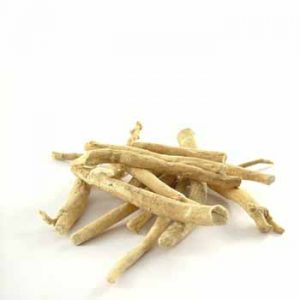 Ashwagandha may work at a genetic level to slow the cellular ageing process. [Photo: Bigstock]

Natural Health News — Extracts from Ashwagandha root may have a unique anti-ageing effect.

Ashwagandha root has been used in India by practitioners of Ayurvedic medicine for many thousands of years. It has potent adaptogenic properties and is used as a general tonic.

In a recent laboratory study ashwagandha extract was found to protect telomeres – the DNA ‘cap’ at the end of each chromosome critical for healthy cell function. Telomeres have been compared with the plastic tips on shoelaces, because they keep chromosome ends from fraying and sticking to each other, which would destroy or scramble an organism’s genetic information – one consequence of which can be cancer.

Telomeres shorten as we age and growing evidence suggests that this shortening can inhibit stem cell function, cellular regeneration, and organ maintenance. We still have a lot to learn about telomeres but maintaining their health appears to be influential in preventing the signs of aging.

» Ashwagandha is known as an adaptogenic herb and used as a general tonic in Ayurvedie medicine.

» New evidence suggests that is may work at a genetic level to help keep cells young – and therefore may have anti-agieng effects relevant to several diseases of old age.

Specifically this laboratory study found that a standardised ashwagandha preparation, KSM-66, triggered the release of telomerase, a ribonucleoprotein that can slow such telomere loss. Exposing cultured cells to 10-50 mcg of ashwagandha root extract, say the researchers, led to an approximately 45% increased activity in telomerase.

KSM 66 is available as a well-researched commercial product, found in many ashwagandha supplements.

“Given the exceptional necessity of the telomeres at the ends of the chromosomes for the maintenance and integrity of the chromosomes, it will be worthwhile to evaluate Ashwagandha under various adult onset disease conditions,” wrote the researchers from Sri Ramachandra University in India in the journal in Advances in Bioscience and Biotechnology.

“Ashwagandha deserves to be evaluated as a potential anti-aging Ayurvedic herbal preparation in higher organisms and the potential mechanism needs to be investigated.”

Ashwagandha may work at a genetic level to slow the cellular ageing process. [Photo: Bigstock]