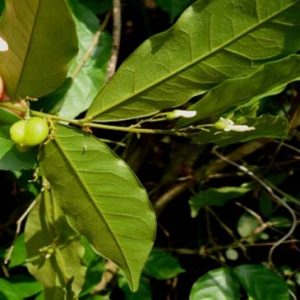 This unassuming African plant appears to work in the same way as conventional drugs to treat Alzheimer's. [Photo: International Institute of Tropical Agriculture, CC BY-2.0 NC]

Natural Health News — A plant extract used for centuries in traditional medicine in Nigeria could form the basis of a new drug to treat Alzheimer’s disease, according to UK researchers.

Their study, published in the journal Pharmaceutical Biology, has shown that the extract taken from the leaves, stem and roots of Carpolobia lutea, could help to protect chemical messengers in the brain which play a vital role in functions including memory and learning.

The tree extract could pave the way for new drugs to tackle patient symptoms but without the unwanted side-effects associated with some current treatments.

The study was led by Dr Wayne Carter in the University’s Division of Medical Sciences and Graduate Entry Medicine, based at Royal Derby Hospital and carried out in collaboration with the University of Port Harcourt in Nigeria and Mansoura University in Egypt.

He said: “As a population we are living longer, and the number of people with dementia is growing at an alarming rate. Our findings suggest that traditional medicines will provide new chemicals able to temper Alzheimer’s disease progression.”

» An international team of researchers has foudn that the African plant Carpolobia lutea could be an effective treatment for Alzheimer’s disease.

» The plant appears to works in the same way as conventional medications, by preventing breakdown of acetylcholine in the brain, reduces levels of which can lead to problems with memory and attention.

» In addition the extracts even showed the ability to lower the levels of free radicals, harmful molecules capable of damaging brain cells, levels of which can be higher in Alzheimer’s patients.

Neurodegenerative diseases represent a huge health burden globally, placing pressure on health services and having a negative impact on the lives of patients and their families.

Researchers and drug companies are racing to discover new treatments for these disorders and have begun looking to plant extracts as a potential source of novel drugs.

In patients with Alzheimer’s disease and other diseases such as Parkinson’s disease and myasthenia gravis, the activity of the neurotransmitter acetylcholine, is reduced, leading to problems with memory and attention.

Carpolobia lutea, known more commonly as cattle stick, is a small shrub or tree found native to Central and West Africa. The leaves and fruit of the plant are edible and herbalists in Nigerian tribes use the essence of the root as an aphrodisiac and the treatment of genitourinary infections, gingivitis, and waist pains. Scientific studies have shown that the plant has antimicrobial properties.

It has also been reported to possess other anti-inflammatory, anti-arthritic, antimicrobial, antimalarial, and analgesic properties. This could be particularly important in Alzheimer’s disease as there is more evidence emerging that Alzheimer’s patients have inflammation in the brain.

The Nottingham study found that even at low doses the plant was highly effective in preventing the breakdown of acetylcholine. At higher concentrations, some of the extracts were even able to inhibit acetylcholine breakdown 90-100% more efficiently than eserine, a drug commonly used in Alzheimer’s treatment.

What’s more, the extracts even showed the ability to lower the levels of free radicals, harmfulmolecules capable of damaging brain cells, levels of which can be higher in Alzheimer’s patients.

In spite of promising results in this and other trials, C lutea is not yet available in Europe; industry and regulators disagree over its classification as either a medicine or food and over what if any health claims could be made for the plant.

This unassuming African plant appears to work in the same way as conventional drugs to treat Alzheimer's. [Photo: International Institute of Tropical Agriculture, CC BY-2.0 NC]