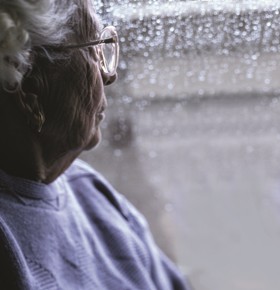 Loneliness worse for health than obesity

Natural Health News — Extreme loneliness can increase an older person’s chances of premature death almost as much as if they were living in extreme poverty, according to new research

The researchers from the University of Chicago looked at dramatic differences in the rate of decline in physical and mental health as people age. They have examined the role of satisfying relationships on older people to develop their resilience, the ability to bounce back after adversity and grow from stresses in life.

They found that loneliness increased the chances of premature death by 14%.  In contrast the impact of disadvantaged socioeconomic status, raised the risk by 19%.

Speaking at the American Association for the Advancement of Science Annual meeting in Chicago, lead researcher John Cacioppo,  a Tiffany & Margaret Blake Distinguished Service Professor in Psychology at the University, noted also that loneliness has twice the impact on early death as does obesity.

The consequences of loneliness to health are dramatic, as feeling isolated from others can disrupt sleep, elevate blood pressure, increase morning rises in the stress hormone cortisol, alter gene expression in immune cells, and increase depression and lower overall subjective well-being, Cacioppo pointed out.

Cacioppo, one of the nation’s leading experts on loneliness, said “We are experiencing a silver tsunami demographically. The Baby Boomers are reaching retirement age. Each day between 2011 and 2030, an average of 10,000 people will turn 65”

Population changes make understanding the role of loneliness and health all the more important, he explained.

“People have to think about how to protect themselves from depression, low subjective well-being and early mortality…Retiring to Florida to live in a warmer climate among strangers isn’t necessarily a good idea if it means you are disconnected from the people who mean the most to you”.

Some aspects of ageing, such as blindness and loss of hearing, however, place people at a special risk for becoming isolated and lonely, he said.

Cacioppo is the author of the 2009 book Loneliness: Human Nature and the Need for Social Connection

It is not solitude or physical isolation itself, but rather the subjective sense of isolation that Cacioppo’s work shows to be so profoundly disruptive. Older people living alone are not necessary lonely if they remain socially engaged and enjoy the company of those around them.

Although some people are happy to be alone, most people thrive from social situations in which they provide mutual support and develop strong rapport. Evolution encouraged people to work together to survive and accordingly most people enjoy companionship over being alone.

He suggested that older people can avoid the consequences of loneliness by staying in touch with former co-workers, taking part in family traditions, and sharing good times with family and friends – all of which gives older adults a chance to connect others about whom they care and who care about them.