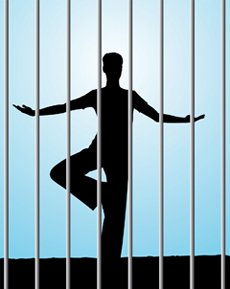 Natural Health News — Yoga can improve mood and mental wellbeing among prisoners, an Oxford University study suggests, and may also have an effect on impulsive behaviour.

The researchers found that after a ten-week yoga course prisoners reported improved mood, reduced stress and were better at a task related to behaviour control than those who continued in their normal prison routine.

“We found that the group that did the yoga course showed an improvement in positive mood, a decrease in stress and greater accuracy in a computer test of impulsivity and attention”, says Dr Amy Bilderbeck who co-led the study at the Departments of Experimental Psychology and Psychiatry at Oxford University.

Dr Bilderbeck adds: “This was only a preliminary study, but nothing has been done like this before. Offering yoga sessions in prisons is cheap, much cheaper than other mental health interventions. If yoga has any effect on addressing mental health problems in prisons, it could save significant amounts of public money.”

The researchers were supported in the running of the trial by the Prison Phoenix Trust, an Oxford-based charity that offers yoga classes in prisons. They approached the Oxford University psychologists about conducting such a study to assess the benefits, though the study was designed, analysed and published independently of the Trust.

The Oxford University researchers, along with colleagues from King’s College London, the University of Surrey and Radboud University Nijmegen in the Netherlands, report their findings in the Journal of Psychiatric Research.

Prisons see rates of mental health problems that are many times higher than the general population, and high levels are often recorded of personal distress, aggression, antisocial behaviour and drug and alcohol abuse among prisoners.

Yoga and meditation have been shown be beneficial in reducing anxiety, depression and improving mood in other areas and settings, so the Oxford researchers carried out an initial exploratory study to look at a range of possible benefits of yoga among prisoners.

Inmates of a range of ages were recruited from five category B and C prisons, a women’s prison and a young offender institution, all in the West Midlands, and were randomly assigned to either a course of ten weekly yoga sessions of 90 minutes run or to a control group.

In sessions with the researchers before and after the yoga course, all the prisoners completed standard psychology questionnaires measuring mood, stress, impulsivity and mental wellbeing. A computer test to measure attention and the participant’s ability to control his or her responses to an on-screen cue was also used after the yoga course.

If yoga is associated with improving behaviour control, as suggested by the results of the computer test, there may be implications for managing aggression, antisocial or problem behaviour in prisons and on return to society, the researchers note – though this was not measured in this initial study.

Dr Bilderbeck, who practices yoga herself, cautions:”‘We’re not saying that organising a weekly yoga session in a prison is going to suddenly turn prisons into calm and serene places, stop all aggression and reduce reoffending rates. We’re not saying that yoga will replace standard treatment of mental health conditions in prison. But what we do see are indications that this relatively cheap, simple option might have multiple benefits for prisoners’ wellbeing and possibly aid in managing the burden of mental health problems in prisons.”

Sam Settle, director of the Prison Phoenix Trust, says: “Almost half of adult prisoners return to prison within a year, having created more victims of crime, so finding ways to offset the damaging effects of prison life is essential for us as a society. This research confirms what prisoners have been consistently telling the Prison Phoenix Trust for 25 years: yoga and meditation help them feel better, make better decisions and develop the capacity to think before acting – all essential in leading positive, crime-free lives once back in the community.”