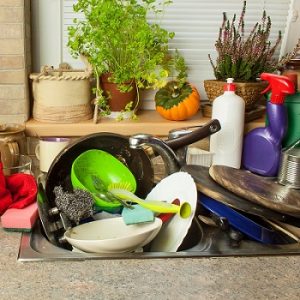 Think of your sinkful of dishes as an opportunity for mindfulness! [Photo: Bigstock]

Feeling stressed? Do the dishes!

Washing those dreadful dishes after a long day seems like the furthest thing from relaxation. Or is it?

Researchers at Florida State University have found that washing dishes – if done mindfully – calms the mind and decreases stress.

Published in the journal Mindfulness, the small study looked at whether washing dishes could be used as an informal contemplative practice that promotes a positive state of mindfulness – a meditative method of focusing attention on the emotions and thoughts of the present moment.

» You don’t always need to make time for meditation in order to get its benefits. US researchers found that approaching an everyday task like dishwashing with focused awareness – mindfulness – could help reduce stress.

» Mindful dishwashers reported a decrease in nervousness by 27% and an increase in mental inspiration by 25%.

From mundane to mindful

“I’ve had an interest in mindfulness for many years, both as a contemplative practitioner and a researcher,” said Adam Hanley, a doctoral candidate in FSU College of Education’s Counseling/School Psychology program and one of the study’s authors. “I was particularly interested in how the mundane activities in life could be used to promote a mindful state and, thus, increase overall sense of well-being.”

After conducting a study the researchers found that mindful dishwashers – those who focused on the smell of the soap, the warmth of the water, the feel of the dishes – reported a decrease in nervousness by 27% and an increase in mental inspiration by 25%. The control group, on the other hand, didn’t experience any benefits.

“It appears that an everyday activity approached with intentionality and awareness may enhance the state of mindfulness,” the study authors conclude.

The results have something to say about how we approach the increasingly varied tasks of our days and how, by re-framing them we can help reduce feelings of stress and overwhelmment.

As the passage above suggests, one way to bring mindfulness to our activities is to slow down an ordinary, common activity, and pay attention to the small experiences that make it up.

Sipping tea is a good example. Instead of gulping down a hot drink in your coffee break, take a moment to be aware of holding the cup, it’s weight, shape and heat, smell the aroma before the first sip, and the taste of the first sip. The experience of drinking the rest of the tea , your breathing, your postures etc are all part of being mindful of the moment.

Think of your sinkful of dishes as an opportunity for mindfulness! [Photo: Bigstock]