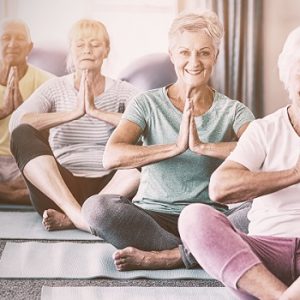 Over just 12 weeks, a combination of yoga and meditation has been found to improve brain connections and boost memory. [Photo: Bigstock]

Natural Health News — Completing a 3-month yoga and meditation course may reduce older adults’ risk of mild cognitive impairment – considered a precursor for development of Alzheimer’s disease and other forms of dementia.

That’s the conclusion of a new study published in the Journal of Alzheimer’s Disease.Mild cognitive impairment (MCI) is characterized by noticeable changes in cognitive function, such as the development of memory and thinking problems. Though these changes are not severe enough to interfere with a person’s independence and day-to-day activities, symptoms can worsen with time, increasing the risk of Alzheimer’s disease and other dementias.

According to the Alzheimer’s Association, long-term studies indicate that around 10-20% of adults aged 65 and older are likely to have MCI. Of these adults, it is estimated that around 6-15% develop dementia each year.

» Yoga is an increasingly popular form of exercise that has been shown to reduce stress and chronic pain, while meditation is good for helping to maintain focus.

» A new analysis has shown that Kundalini yoga, in combination with Kirtan Kriya meditation, might also be good for the mind, helping to boost levels of key proteins that improve connectivity in the brain thus reducing the risk of developing dementia.

» The researchers conclude that a regular practice of yoga and meditation could be a simple, safe and low-cost solution to improving brain fitness.

While there are currently no approved medications to treat MCI, experts recommend that older adults with the condition engage in mentally stimulating activities – such as crossword puzzles – in order to reduce their risk of dementia.

Now, researchers from the University of California-Los Angeles (UCLA) say practicing yoga and meditation may be just as effective – if not better – for protecting cognitive function.

For their study, the researchers enrolled 25 participants aged 55 and older. Each participant completed memory tests and underwent functional magnetic resonance imaging (fMRI), enabling the researchers to assess their cognitive function and brain activity.

Then for 12 weeks, 14 of the participants took part in a 1-hour Kundalini yoga class once a week and practiced Kirtan Kriya meditation for 20 minutes every day.

Kundalini yoga is referred to as the “yoga of awareness,” incorporating breathing techniques, meditation, and chanting.

Kirtan Kriya meditation involves chanting, hand movements, and light visualization. Senior author Dr. Helen Lavretsky, notes that this form of meditation has been practiced in India for hundreds of years as a way to maintain cognitive function in older adults.

The remaining 11 participants engaged in 1 hour of memory enhancement training – through activities such as crossword puzzles or computer games – once a week for 12 weeks, and they also spent 20 minutes a day completing memory exercises.

Both groups showed improvements in verbal memory skills – the ability to remember names and lists of words – at the end of the 12 weeks.

However, the participants who practiced yoga and meditation demonstrated greater improvements in visual-spatial memory skills – the ability to navigate and remember locations – than those who engaged in memory enhancement training.

Additionally, the yoga-meditation group fared better than the memory enhancement training group when it came to levels of anxiety and depression, as well as coping skills and stress resilience.

The team says the latter finding is particularly relevant for people who experience MCI, as the condition can be emotionally difficult to come to terms with.

“When you have memory loss, you can get quite anxious about that and it can lead to depression,” notes Dr. Lavretsky.

The team suggests that the improvements in memory, mood, and stress resilience seen with yoga and meditation may be down to the increased production of a protein called brain-derived neurotrophic growth factor (BDNF).

BDNF is responsible for boosting connections between brain cells, as well as maintaining the survival of existing brain cell connections and in fact although there was improvement in brain connectivity in both groups, the improvement was greater in the yoga group.

Says Lavretsky: “If you or your relatives are trying to improve your memory or offset the risk for developing memory loss or dementia, a regular practice of yoga and meditation could be a simple, safe and low-cost solution to improving your brain fitness.”

Over just 12 weeks, a combination of yoga and meditation has been found to improve brain connections and boost memory. [Photo: Bigstock]