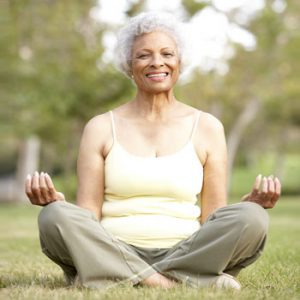 Regular practice of yoga could help protect against cognitive decline in old age by bulking up areas of the brain associated with attention and memory. [Photo: Bigstock]

Natural Health News — Yoga is a traditional mindfulness practice that brings intentional focus to the body, mind and breath.

There is copious evidence that regular practice can improve flexibility and strength, but according to new research it may also have positive effects on the physical structure of the brain.

Published in Frontiers in Aging Neuroscience, it included two groups of 21 healthy women matched for age, years of education, and level of physical activity.

» Yoga is a mind body practice that has been shown to improve strength and flexibility with regular practice.

» New research suggests it may also have positive effects on the physical structure of the brain.

» In women who were long term practitioners of yoga, the prefrontal cortex was thicker than in those who did not practice yoga regularly.

» This region of the brain is linked to cognitive functions like attention and memory and the outcome suggests that regular yoga could help protect against cognitive decline.

A key difference, however, was that one group had practiced hatha yoga at least twice weekly for the eight years prior to the study and the other group had never practiced yoga, meditation, or other mind-body interventions.

Brain imaging allowed the researchers to measure the thickness of the brain’s cortex in each participant. They also administered several tests to evaluate the women’s performance of daily living activities and cognitive function, symptoms of depression, as well as height and weight.

Imaging showed that the regular yoga practitioners had greater cortical thickness in the left prefrontal cortex, in brain area associated with cognitive functions like attention and memory.

The results suggest that yoga could be an effective way to protect against cognitive decline in old age.

“In the same way as muscles, the brain develops through training,” explains Elisa Kozasa of Hospital Israelita Albert Einstein in São Paulo, Brazil, a researcher involved in the study, “Like any contemplative practice, yoga has a cognitive component in which attention and concentration are important.”

Yoga requires focused attention on muscles and posture, and this controlled attention and awareness engages the prefrontal cortex.

Meditation, which also involves controlled attention, has been found in prior research to increase blood flow to the prefrontal cortex and increase cognitive function. Future research may show us whether yoga’s effects on brain structure really can translate into prevention of age-related cognitive losses.

Regular practice of yoga could help protect against cognitive decline in old age by bulking up areas of the brain associated with attention and memory. [Photo: Bigstock]