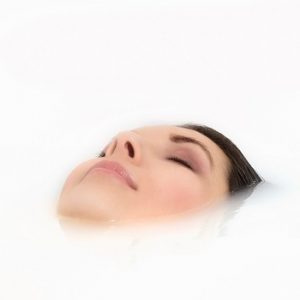 A hot bath twice a week coudl help reset you body temperature and with it your mood. [Photo: Bigstock]

Sink into a hot bath to help lift depression

Natural Health News — Taking hot baths twice a week could be of as much benefit to depression as regular exercise, a small study has found.

The benefits, the experts suggest, could be because heat restores the body’s natural temperature rhythm over the course of a day, which can be disrupted in depressed patients.

Scientists from the University of Freiburg in Germany tested the effects of thermal baths on 45 people with depression. The people in the study group (average age 48) all had moderate to severe depression, which was measured on the commonly used HAM-D scale.

On this scale a score of 19 or higher out of 50 indicates someone has severe depression – the average score among participants was 21.7.

Participants were randomly assigned to either twice-weekly spa bathing, or two sessions of moderate exercise a week over a two week period, after which time their depression retested.

The bath group were asked to sit in a 40°C (104°F) bath for 30 minutes, then relax with hot water bottles for 20 minutes. People in the exercise group had to do a moderate aerobic workout, such as running, dancing or swimming, for 40 to 45 minutes.

Those in the bathing group saw an average drop of six points on the HAM-D scale within a fortnight, suggesting someone with severe depression could cut their symptoms to moderate depression, or somebody already on a moderate score could drop to mild by bathing. In contrast exercise patients only shaved three points off their score.

In addition, while 13 out of 23 people dropped out of the exercise group, only two out of 22 failed to complete the hot bath treatments.

Because baths are easy, enjoyable and have a fast acting effect, the team notes, people are more likely to keep up the habit over the long term.

Heat may rest the ‘clock’

Although the exact causes of depression are not clear, one theory is that it is linked to a disruption in our circadian rhythm – or body clock – which dictates our cycles of hormones, body temperature and sleep, among other things.

In those with depression, body temperature may not be well regulated and the heat from the baths and hot water bottles may have helped correct this. Results of this study, for instance, showed that the body temperatures of those in the bath group increased by around 2°C (3.6°F) after bathing.

A hot bath twice a week coudl help reset you body temperature and with it your mood. [Photo: Bigstock]