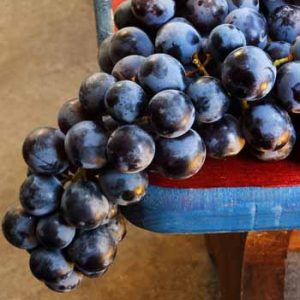 Grapes are rich in antioxidant polyphenols that can help protect the brain. [Photo: Bigstock]

Natural Health News — Including a glass of grape juice in the daily diet may boost memory and brain performance particularly for those who lead a stressful lifestyle such as working mothers, suggests a new study.

Previous studies have identified the benefits polyphenol-rich compounds have on brain function in older people. But this new study, from the University of Leeds in the UK, is the first to demonstrate that the cognitive benefits of drinking grape juice may extend to other age groups as well – in this case healthy, 40-50 year old working women with pre-teen children.

The women were divided into two groups: one drank 355ml of Concord grape juice daily while the other drank the placebo (a grape-flavoured, sugar-sweetened drink).

» In the first, stressed mums consuming a glass of grape juice a day experienced a boost in memory and brain function.

» In the second, a laboratory study, 100% grape juice was shown to slow the absorption of sugars intestinal cells, suggesting it could have a role to play in improving blood sugar balance.

Fighting the effects of stress

Over the course of 12 weeks, the women were asked to undergo a series of tests that assessed their cognitive performance. One test was a 25-minute driving simulator challenge in which they were asked to match the speed and direction of a lead vehicle.

The women who who drank the grape juice showed significant improvements in immediate spatial memory and driving performance when compared to those who drank the placebo.

While the study was funded by Welch’s – producers of grape juice drinks – the findings, presented at the recent biennial International Conference on Polyphenols & Health (ICPH) in Dijon, France, do add to a growing body of evidence for grape juice benefits, and in particular the brain-boosting effects of polyphenols.

Benefits for blood sugar too

A second study presented at the ICPH suggested that  the polyphenols in grape juice (specifically from Concord and Niagra grapes) may be able to help balance the body’s glycaemic response by slowing down the absorption of these sugars.
Researchers from the Department of Food Science at Purdue University, suggested that after drinking grape juice, blood sugar levels may rise less dramatically than would be expected, potentially aiding in blood glucose control as part of a daily health regimen.

This laboratory study using human intestinal cells, found that polyphenols naturally present in grape juice were able to slow the absorption of the naturally occurring sugars present in the juice. Compared to a sugar-sweetened control liquid, 100% grape juice may result in a modestly lower glycaemic response, which, say the scientists can contribute to long-term health.

The next step is to see if this phenomenon holds true in human subjects and whether this is true for all types of fresh 100% fruit juice or whether there is something unique in dark red grape juices. Previous research has shown that when grape juice is compared to orange juice and grapefruit juice, or when red wine is compared to white wine or beer, the grape juice and red wine provide a greater level of heart benefits.

Grapes are rich in antioxidant polyphenols that can help protect the brain. [Photo: Bigstock]