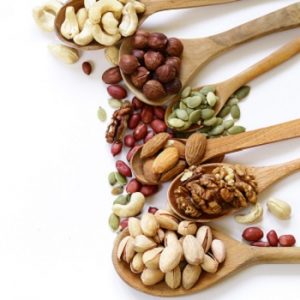 Many types of nuts and seeds contain the amino acid arginine. [Photo: Bigstock]

Depressed people may be low in arginine

Natural Health News — People suffering from major depressive disorder have reduced arginine levels, according to a new study from Finland.

Arginine is an amino acid which the body uses to produce nitric oxide which, among other things supports a healthy vascular and nervous system.

The study carried out by the University of Eastern Finland and Kuopio University Hospital compared 99 adults with diagnosed major depressive disorder to 253 non-depressed individuals. The concentrations of three amino acids, namely arginine, citrulline and ornithine, were analysed from their fasting glucose samples, and this data was used to calculate their global arginine bioavailability ratio (GABR) – an indicator of the body’s arginine levels.

» A new study has found that those with major depressive disorder may be low in the amino acid arginine.

» Results of the study suggest that, in depressed individuals, arginine may be less bioavailable; this may be because of the way that depression-induced inflammatory responses can interfere with absorption.

» It is not yet clear if supplementation can help, but arginine is widely available in both animal and plant foods.

A role for inflammation?

People with depression had weaker arginine bioavailability than their non-depressed counterparts. The use of anti-depressants or anti-psychotics did not affect the concentrations, either. There were also no clear differences in the concentrations measured from people who had recovered from depression and people who remained depressed.

Toni Ali-Sisto, the lead author of the study, comments: “It is possible that depression-induced inflammatory responses lead to reduced arginine levels. This may result in insufficient production of nitric oxide for the needs of the nervous system and circulation. However, we don’t know yet what exactly causes reduced arginine bioavailability in people with depression,”

Although the results showed that people with depression have reduced arginine bioavailability, the researchers say this doesn’t mean that taking an arginine supplement would protect against depression. “That’s an area for further research,” Ali-Sisto says

Arginine is considered a semi-essential amino acid because while it is needed for children’s growth, it has long been considered nonessential for healthy adults. The body can also make arginine in addition to getting it from food sources, so deficiencies are generally considered rare. However, a person can become deficient in arginine if the body’s production does not meet the body’s requirements or if, as this study suggests, something is interfering with the body’s ability to absorb it.

Arginine can be taken as a supplement but too much can have side effects such as upset stomach and diarrhoea. Larger doses may also carry risks for people who take other medications or have certain health conditions.

A varied diet should help ensure you get adequate arginine and the best food sources of arginine are:

Many types of nuts and seeds contain the amino acid arginine. [Photo: Bigstock]