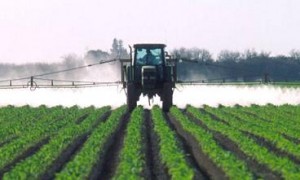 Drift from fields sprayed with pesticides can reach nearby residents, harming their health

UK government agrees to tighten up rules on pesticide safety

Natural Health News — After 12 months of deliberation the UK government has announced that it will tighten up rules on pesticide safety assessments.

As part of its new protocol, announced this week, the risk to residents from crop spraying will be included in safety assessments and a two-metre distance between the sprayer and a resident or bystander should be assumed in risk assessments; currently regulations stipulate an eight-metre distance (an assumption that underestimates people’s exposure to the drift from pesticides spraying).

Long-time pesticides campaigner Georgina Downs* has hailed the announcement as a “significant victory” for her lengthy campaign to get the Government to accept the flaws in its approach to assessing the risk of crop sprays in the UK.

The changes apply to new pesticides coming through the regulatory system but Ms Downs believes the u-turn on this issue raises important questions about whether pesticides already approved will also now be reassessed.

In 2009, Ministers at Defra (Department for Environment, Farming and Rural Affairs) requested a  review of the UK’s exposure and risk assessment approach for individuals exposed to agricultural pesticides sprayed on crops, following a legal challenge by Ms Downs against the Government policy.

Advising the government was working group called the Bystander Risk Assessment Working Group (BRAWG), which presented a report on its findings to Ministers in December 2012.

The Government said that it accepted all the report’s recommendations which include:

It added that the report ‘updated the risk assessment in line with the latest science’ and that it would seek to ensure the approach recommended by BRAWG was adopted at EU level, rather than simply implemented on a UK basis.

In relation to this as a result of representations to various European institutions since 2002, the campaign run by Ms. Downs had already been successful in ensuring that new exposure and risk assessment specifications for residents and bystanders are included in, most importantly, Commission Regulation (EU) No 284/2013 of 1st March 2013.

That document sets out the new data requirements for pesticide products. There is also an EFSA Guidance Document on pesticide exposure assessment for operators, workers, residents and bystanders, due to be finalised next year.

Both these documents reinforce the long standing requirements on Member States, under EU law, regarding the risk assessments that must be undertaken for all the necessary exposure groups (i.e. operators, workers, residents bystanders) before any pesticide products can be authorised for use, in order to establish that there will be no harmful effect on human health (as required in Article 4 of the Plant Protection Products (PPP) Regulations 1107/2009). This is a requirement the UK had previously ignored.

By accepting all the BRAWG report recommendations, Ms Downs says “the Government is now finally acknowledging that the risk assessment approach relied upon to date has been inadequate. This is what I have always argued since the outset of my campaign, as there has been no risk assessment to cover the exposure of residents living near sprayed fields.”

That risk is well-documented. For example, a recent review  in Toxicology and Applied Pharmacology, highlighted the vast number of studies that found associations of exposure to pesticides (including in those living close to sprayed fields) with a wide range of chronic diseases.

The review concludes that, it is time to find a preventive approach and find efficient alternatives to using pesticides.

She cautions, however, that there is still some way to go. One of the key recommendations, the assumption of a two metre distance between the sprayer boom and a person was still inadequate given that ‘in reality many residents live within a metre or less away from a field’.

In addition, she notes that the BRAWG report “still did not acknowledge the extent of the very serious flaws in the existing policy and approach” and as such did not go far enough in its recommendations.

Over the 12 years of her campaign, Ms Downs has received numerous reports of acute, short-term and chronic long-term illnesses in rural communities blamed on the use of pesticides in nearby fields. Many of these are detailed on her campaign website and in her own press release responding to the Defra announcement.

“The Government must now as a matter of urgency secure the protection of people in the countryside by prohibiting the use of pesticides in substantial distances in the locality of residents’ homes, schools, playgrounds, etc,” she added.

* Georgina Downs runs the multi award winning UK Pesticides Campaign, which is the only campaign that specifically exists to highlight the risks, and adverse health and environmental impacts of pesticides on rural residents and communities, as well as on other members of the public exposed. The UK Pesticides Campaign was founded in 2001 after Ms Downs identified serious flaws in the Government’s so-called “bystander risk assessment”.

Drift from fields sprayed with pesticides can reach nearby residents, harming their health