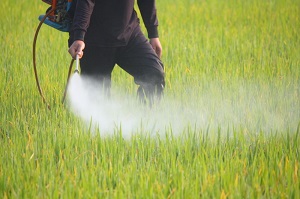 Exposure to DDT and related hormone-disrupting pesticides can produce a higher risk of heart disease than obesity alone.

Natural Health News — Pesticide exposure can contribute to increased cardiovascular disease risk and inflammation in premenopausal women, above and beyond any risk from obesity, researchers warn.

The study by Portuguese scientists looked specifically at the effects of exposure to polychlorinated pesticides such as DDT. Although DDT was banned in many countries in the 1970s, it remains widespread in the environment and food supply.

DDT and related pesticides are known as environmental estrogens because they can mimic and interfere with the function of the hormone estrogen. Research has found DDT exposure is linked to birth defects, reduced fertility and increased risk of type-2 diabetes.

“After the body breaks down DDT along with similar pesticides, chemical remnants called metabolites accumulate in women’s fat tissue,” said one of the study’s authors, Diana Teixeira, PhD student of the Faculty of Medicine, University of Porto in Porto, Portugal.

“When higher amounts of these environmental estrogens collect in the fat tissue, it can compromise the protective effect the body’s natural estrogen has on a premenopausal woman’s heart health. This leaves women at increased risk of developing cardiovascular disease and inflammation.”

The study in the Journal of Clinical Endocrinology & Metabolism analysed the amount of endocrine-disrupting chemicals in fat tissue and blood samples from 121 obese women who underwent bariatric surgery. Among the women, 73 were classified as premenopausal and 48 postmenopausal. The researchers tested the participants’ fasting blood glucose and cholesterol to estimate the women’s 10-year risk of developing cardiovascular disease.

Researchers found that among premenopausal women, women with higher concentrations of environmental estrogens in their visceral fat tissue from the belly were more likely to have higher average blood sugar levels. Among premenopausal women, those with higher levels of environmental estrogens in their blood tended to have more inflammation and faced a greater risk of cardiovascular disease.

“Our findings show that endocrine-disrupting chemicals tend to aggravate complications of obesity, including inflammation and cardiovascular disease risk, in premenopausal women,” Teixeira said.

She suggested that  measuring environmental estrogen levels could help physicians identify women who are at risk of developing cardiovascular and metabolic disease and help suggest ways of taking preventative action.

Exposure to DDT and related hormone-disrupting pesticides can produce a higher risk of heart disease than obesity alone.