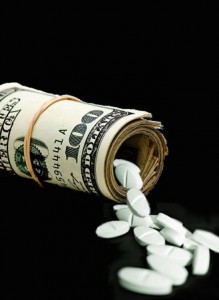 As satisfaction with UK GP care falls, a new US survey shows family practitioners get 'rewards' from drug companies for pushing drugs on patients

Natural Health News — If you think your doctor has prescribed a drug for you because it is the best way to treat your condition – think again.

A damning new study in the US,  published in the current edition of the Annals of Family Medicine looked at doctors prescribing habits. The researchers interviewed 58 clinicians and 70 patients at 44 primary care clinics in a low income area in the US state of Michigan.

They found that 40% of people over age 60 were taking 5 medications or more – a finding echoed by national figures from the US Centres for Disease Control data which show 37% of adults over 60 taking 5 or more medications.

In the UK more than 20% of adults over the age of 70 are taking five or more drugs.

Damaging to patient health and wealth

In the current study the average prescriptions per patient was 4.8. That figure is all the more shocking when you realise that this particular study focused mainly on clinics serving mainly low income and minority patients.

Cash-strapped clinics serving cash-strapped patients might be expected to follow a path of restraint and awareness not only of the cost of drugs, but the potential for drug cocktails to cause further harm to health. What is more the researchers noted that many patients were put onto drug regimes “after having moderately elevated test results (often at levels considered normal just a few years ago)”.

So why are the doctors prescribing drugs instead of lifestyle changes, which would probably be more effective?

These physicians, say the researchers, are caught up in an “auditing and reward system.” That means physicians are pushed by insurance companies to make patients ‘numbers’ (blood pressure and blood sugar, for example) fit into inflexible ‘norms’  that can only be achieved by multiple drug manipulation and then are rewarded by drug companies for prescribing more and more drugs. Nowhere in this system is it recognised that patient health and well being suffers as a result.

In this study 72% of the clinicians interviewed had regular contact with drug reps and 62% saw more than 10 reps each week. While protesting that they always were alert for commercial bias, 77% reported finding the information they received from the reps useful.

Adverse reactions go up, and because most physicians are trained to treat symptoms not causes what is called a ‘prescribing cascade’ (but which is more of an avalanche) kicks in.

For each new symptom a new drug is prescribed and the physicians either don’t recognise the adverse reactions for what they are, or else feel they pressured by guidelines over ‘healthy numbers’  to continue prescribing regardless.

The social cost impact of this avalanche of drugs is considerable. Patients, particularly those on incomes, end up spending more and more money on  drugs leaving less for the things that might truly enrich health – such as a healthy diet, or even a holiday.

Doctors with blinders on

According to the study around a quarter of the clinicians interviewed acknowledged the problem of managing multiple medications but, “When discussing these complicated issues, only 1 clinician mentioned prescribing fewer drugs; all the rest focused on reaching goal numbers by either adding or changing medications.”

Further quotes from the study are sad and revealing A typical case report showed:

“Her diabetes medications cause diarrhea and bouts of hypoglycemia, which interferes with her ability to leave her home because she must eat and go to the bathroom so frequently. She also had 5 visits to the emergency department in 1 month for excruciating headaches, before they were determined to be an adverse effect of the additional hypertension medication she had been prescribed after her diabetes diagnosis. … At her most recent appointment, her physician happily told her: ‘Your blood pressure is 130/78 [mm Hg], your A1c is 7.0[%], and your cholesterol was normal. Very good!'”

“On the basis of current standards, the clinician classified this patient as healthy, a success story; however, this classification does not address the broader question of her well-being. Getting test numbers into the stipulated range jeopardized her employment and led to repeated hospitalizations and serious financial burden.”

In the mean time some clinicians seem genuinely bewildered by the fact that the drugs aren’t working:

“I’ve got patients on 4 different medications and their blood pressure is still uncontrolled. We try sending them to the cardiologists, and they say, ‘Just keep adding stuff because there’s really nothing we can do about this.’…Some people whose blood pressure that we do get normal again, they don’t function very well at all. I’m not sure why.”

With 45% of the US population having been diagnosed with a chronic condition and nearly 40% of people older than 60 taking five or more medications, researchers raise questions about the nature of the relationship between the expanding definition of chronic illness, the increasingly close relationship between doctors and pharmaceutical companies and the explosion in pharmaceutical use in the United States.

To reverse these trends and limit the influence of the pharmaceutical industry on clinical practice, the authors call for 1) policies that will exclude individuals or organisations with financial conflicts of interest from involvement with clinical guideline-writing panels, 2) physicians to be discouraged from seeing drug representatives, and 3) the monitoring of clinician auditing and reward plans for evidence of unintended negative effects on patients.

Where is the patient’s voice?

Interestingly, in this study patients’ views – on their health, or their level of satisfaction with this treatment were not reported. If they had they might have shown something similar to what has just been revealed in the UK.

A recent analysis of the British Social Attitudes Survey by the Kings Fund found that patient satisfaction with the NHS had dropped to just 58%. The researchers were loathe to blame poor care and instead shifted the blame to negative political rhetoric in the media. That was three months ago.

This week it was revealed that complaints against UK doctors have reached record levels, rising 23% in the last year alone. This means that 1 in 64 doctors now facing the possibility of an investigation by the General Medical Council. Figures for the first six months of 2012 show a further rise of 27%.

When doctor complaints rise the usual response is blame the patient. In this respect the ‘ chief executive Niall Dickson didn’t disappoint. He blamed the rise on patients’ “high expectations” of medical care.

In the US, figures from the American Medical Association show more than 60% of doctors over the age of 55 have been sued at least once in their career.

Satisfied patients don’t sue. Years of data have shown that what patients most want when they complain about a doctors is a dialogue about care that left them feeling uncared for. They want an explanation of what went wrong, an admission of that the doctors got it wrong, and an apology.

In both the UK and US most complaints never see the light of day. They are either denied or withdrawn before any possibility of such a dialogue.

Dead patients are the happiest

Measuring patient satisfaction is never easy or straightforward. In the US a recent survey found that the most satisfied patients had an 8% lower rate of visits to the emergency room compared to the least satisfied. Fair enough.

But it also found that:

Given the state of medical care on both sides of the Atlantic, is anyone particularly shocked that dead patients are more likely to be satisfied with their care? For them, at least, the ordeal of modern conventional healthcare is over.

As satisfaction with UK GP care falls, a new US survey shows family practitioners get 'rewards' from drug companies for pushing drugs on patients