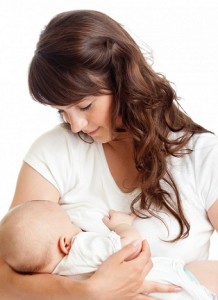 Breastfeeding is one way to protect children from obesity later in life.

Natural Health News — New evidence adds to a growing body of data linking a child’s early environment before and soon after birth to their chance of becoming obese later in life.

Previous studies have identified a number of individual early life ‘risk factors’ but few have evaluated the size of their combined effects.

Published in The American Journal of Clinical Nutrition, the research shows at age four, children with four or five of these factors were 3.99 times more likely to be overweight or obese than children who had experienced none, and fat mass was, on average, 19% higher.

By age six, the risk increased so that these children were 4.65 times more likely to be overweight or obese and fat mass was 47% higher. Importantly, these differences were not explained by other factors, such as the children’s quality of diet or physical activity levels.

The data analysed came from 991 children taking part in the Southampton Women’s Survey – one of the largest studies of mothers recruited before pregnancy, along with their infants and children.

Professor Sian Robinson, who led the study, says: “Early life may be a ‘critical period’ when appetite and regulation of energy balance are programmed, which has lifelong consequences for the risk of gaining excess weight. Although the importance of early prevention is recognised, much of the focus is on school-aged children. Our findings suggest that interventions to prevent obesity need to start earlier, even before conception, and that having a healthy body weight and not smoking at this time could be key.”

Professor Cyrus Cooper, Director of the University’s MRC Lifecourse Epidemiology Unit comments: “This study is a very good example of the programme of multidisciplinary research being conducted at the Unit, in which we are seeking to understand the role of the mother’s diet and lifestyle as influences on the development and body composition of her child.

“The large differences in the risk of being overweight in childhood that were shown in this study highlight the importance of early life risk factors. These findings could have important implications for obesity prevention policy and will help us to design future interventions aimed at optimising body composition, with benefits for lifelong health.”

The study comes at the same time as a six part series in the medical journal the Lancet, shows that globally  progress toward tackling obesity has been “unacceptably slow”. In less than a generation, rates of child obesity have risen dramatically worldwide, yet few countries have taken regulatory steps to protect children or implemented recommended healthy food policies.

Breastfeeding is one way to protect children from obesity later in life.