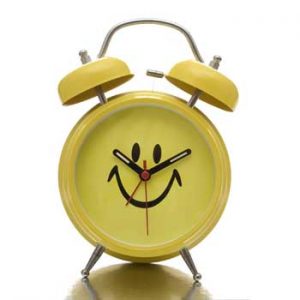 Higher levels of the hormone cortisol in the morning can help us 'unlearn' fearful responses. [Photo: Bigstock]

The study found that morning sessions helped psychotherapy patients overcome their panic and anxiety and phobic avoidance better, in part, because levels of cortisol – a naturally occurring hormone – are at their highest then

Fear is an adaptive response that has evolved to provide protection from potential harm in the environment. But when fear is excessive and disproportionate to the situation, it can lead to the development of an anxiety disorder.

According to lead author and clinical psychologist Alicia E. Meuret, of Southern Methodist University, Dallas, cortisol has a role to play in what is termed ‘fear extinction’ in certain therapeutic situations. Fear extinction is a process by which the patient gradually learns a different response to the thing that causes fear or anxiety.

» Fears and phobias can be difficult to treat, but one method that works is exposure therapy – which gradually teaches a person to respond differently to whatever frightens them. But not all people respond to this treatment.

» Researchers investigating why discovered that therapy sessions scheduled in the morning had better results.

» This is because our levels of the hormone cortisol are higher at that time of day and cortisol is thought to enhance our learning ability as well as our ability of suppress fearful memories.

“For example,” says Meuret “a patient may think that standing in an elevator could cause him or her to lose control or faint, suffocate, or may create physical symptoms that would be intolerable,” Meuret said. “By having them stand in an elevator for a prolonged time, the patient learns that their feared outcome does not occur, despite high levels of anxiety. We call this corrective learning.”

But not everyone benefit equally from exposure therapy, and researchers were keen to investigate why.

Building on previous research the authors speculated that higher levels of cortisol could be a factor.

Cortisol is released from the adrenal glands in a rhythmic pattern throughout the day as part of the body’s circadian rhythm.  Levels are generally is highest in the morning to help energise you for the day ahead, and lowest during the night when you should be resting and rejuvenating. In normal amoutns cortisol is protective and even has a role to play in breaking down fat and protein for conversion into glucose.

The new study involved 24 people diagnosed with panic disorder and agoraphobia, which is a fear of public places where a person feels panicked, trapped or helpless.

The participants underwent a standard psychotherapeutic treatment of “exposure therapy,” in which patients are exposed to situations that can typically induce their panic or fear with the goal that repeated exposure can help diminish a disabling fear response over time.

Patients received weekly sessions over three weeks, each lasting, on average, 40 minutes. Exposure situations included tall buildings, highways and overpasses, enclosed places such as elevators, supermarkets, movie theaters, and public transportation such as subways and intercity trains and boats. In addition, levels of cortisol were measured at various times during each exposure session by swabbing inside the mouth for saliva.

All the patients improved but those who made the biggest gains did so when their sessions started earlier in the day.

The study findings promote taking advantage of two simple and naturally occurring agents – our own cortisol levels and time of day.

Although the study was too small to draw definitive conclusions about how cortisol works, Meuret suggests it may suppress the fear memory established by earlier distressing encounters while at the same time helping a patient better absorb and remember the new corrective information.

“Notably, higher cortisol was related to greater reductions in threat appraisal, perceived control and panic symptom severity at the next session,” Meuret said.

The findings were reported in the journal Psychoneuroendocrinology.

Higher levels of the hormone cortisol in the morning can help us 'unlearn' fearful responses. [Photo: Bigstock]