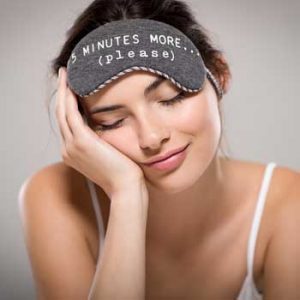 Making time for catch-up sleep could keep you healthy in the longer-term. [Photo: Bigstock]

If you want to stay healthy, make time for catch-up sleep

Natural Health News — Two consecutive nights of extended sleep at the weekend could help counteract the increased risk of diabetes associated lack of sleep during the week.

The pattern of cutting back on sleep during the work week followed by catching up on sleep over the weekend is common. Even short-term sleep restriction, with four or five hours of sleep per night, can increase the risk of developing diabetes by about 16% – comparable to the increase in risk caused by obesity.

The finding, based on a study performed at the University of Chicago sleep laboratory, published online in the journal Diabetes Care, could have implications for the large numbers of people who work long hours.

» Being chronically sleep deprived can damage health on multiple levels.

» When US researchers monitored a small group of otherwise healthy, sleep-deprived men, blood tests revealed that the men’s insulin sensitivity went down while insulting secretion went up – both risks for diabetes.

» Getting enough catch-up sleep however helped improve the men’s insulin levels and the researchers suggest that for people who work long hours, scheduling catch up sleep is vital for health.

“We found that two long nights spent catching up on lost sleep can reverse the negative metabolic effects of four consecutive nights of restricted sleep,” said study author Josiane Broussard, PhD, an assistant research professor in the Department of Integrative Physiology at the University of Colorado, Boulder.

For this small study the researchers recruited 19 volunteers, all healthy young men. The men’s sleeping patterns were manipulated so that they were sleep deprived and then allowed 2 nights of extended sleep, during which they averaged 9.7 hours of sleep.

After two nights of extended sleep, however, insulin sensitivity and the risk of diabetes returned to normal sleep levels.

The researchers admit their study is too small to be definitive – and of course, only involved healthy men – but the results point the way towards more comprehensive research in the future.

“The metabolic response to this extra sleep was very interesting and encouraging,” said senior co-author Esra Tasali, MD, associate professor of medicine at the University of Chicago. “It shows that young, healthy people who sporadically fail to get sufficient sleep during the work week can reduce their diabetes risk if they catch up on sleep during the weekend.”

Increased risk of developing diabetes is not the only drawback associated with inadequate sleep. Chronically sleep deprived people are more likely to make poor food choices, and develop other health problems such as increased inflammation and high blood pressure.

They also show cognitive problems, tend to be less alert and have difficulty concentrating, reasoning and solving problems. They are prone to traffic accidents. It is possible that getting more catch-up sleep could also have a beneficial impact on these problems.

Making time for catch-up sleep could keep you healthy in the longer-term. [Photo: Bigstock]