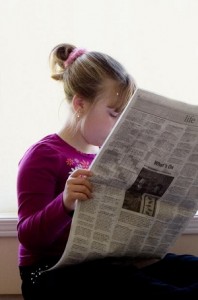 Taking a daily supplement of the omega-3 fatty acid DHA gave children with the greatest trouble reading the most benefit [Image: Gracey - Morguefile]

Natural Health News — New research suggests that taking a daily supplement of DHA, an omega-3 fatty acid, could be a simple and effective way to improve reading and behaviour in healthy but underperforming children.

British researchers reporting in the journal PLoS ONE, identified 362 healthy 7 to 9 year-olds attending mainstream Oxfordshire primary schools and who had underperformed in standardised reading tests. The researchers compared the effect of taking daily supplements of omega-3 DHA with placebo.

The treatment dose was 600mg per day of omega-3 DHA from algal oil, or a taste and colour-matched vegetable oil placebo, which the children took for four months. During school days, school staff administered the capsules, and on non-school days the parents gave them to the children.

DHA stands for docosahexaenoic acid, an important omega-3 fatty acid that is found in fish, seafood and algae (seaweed). The type used in this study comes from algae, making it suitable for vegetarians.

On the whole people living in modern developed countries do not get enough essential omega-3 fatty acids, a lack of which is thought to contribute to a wide range of health problems, both physical and mental.

Some previous clinical trials have suggested omega-3 supplements could improve child behaviour and learning, but most of these have involved children with neurodevelopmental disorders, for example ADHD (attention-deficit/hyperactivity disorder) and DCD (developmental coordination disorder).

This study aimed to see if the same improvement  was possible in a more general population.

Benefits for those most in need

“Our results showed that taking daily supplements of omega-3 DHA improved reading performance for the poorest readers (those in the lowest fifth of the normal range) and helped these children to catch up with their peer group.”

The overall study sample comprised children whose initial reading ability was in the lowest third of the general population range. The study results showed that the treatment had no effect on this overall group.

But, there was a significant improvement in reading ability in the children whose initial reading ability was in the lowest fifth of the general population range and who took DHA.

Parents of children whose initial reading performance was lowest and who showed improvements also said they saw an overall improvement in their children’s behavior.

The University of Oxford is now doing a similar DHA supplementation study with a larger group of underperforming children.

Taking a daily supplement of the omega-3 fatty acid DHA gave children with the greatest trouble reading the most benefit [Image: Gracey - Morguefile]