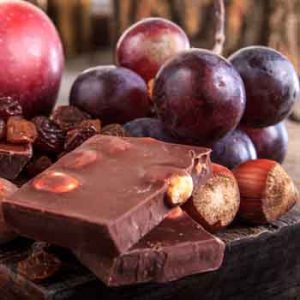 Natural Health News — Resveratrol – a natural compound found in grapes and other plant foods – can help address a hormone imbalance in women with polycystic ovary syndrome (PCOS), a leading cause of infertility in women.

Women who have PCOS produce higher amounts of testosterone and other androgen hormones than average. Although these reproductive hormones are typically associated with men, women’s bodies also produce small amounts.

» Women with polycystic ovary syndrome (PCOS) may benefit from a daily supplement of resveratrol – an antioxidant, anti-inflammatory substance found naturally in many plants.

» In this study 3 months of supplementation helped reduce levels of androgens (male hormones) in the women’s bodies and also helped to improve insulin sensitivity.

The elevated levels in women with PCOS can contribute to irregular or absent menstrual periods, infertility, weight gain, acne or excess hair on the face and body. Women who have PCOS also face a higher risk of developing other health problems, such as diabetes.

Resveratrol is one of a group of plant compounds known as polyphenols which are antioxidant and anti-inflammatory. Red wine, grapes, raspberries, peanuts, cocoa and many other plants contain high levels of resveratrol and previous research has shown that resveratrol is linked to a reduced risk of coronary heart disease and cancer.

“Our study is the first clinical trial to find resveratrol significantly lowers PCOS patients’ levels of testosterone as well as dehydroepiandrosterone sulfate (DHEAS), another hormone that the body can convert into testosterone,” said the study’s senior author, Antoni J. Duleba, MD, of the University of California, San Diego in La Jolla. “This nutritional supplement can help moderate the hormone imbalance that is one of the central features of PCOS.”

For the study published in the Journal of Clinical Endocrinology & Metabolism, 30 women with PCOS were randomly assigned to either take a resveratrol supplement (1500mg per day) or a placebo pill daily for three months. The participants had blood samples drawn at the beginning and end of the study to determine levels of testosterone and other androgen hormones. The women also underwent an oral glucose tolerance test at the start and conclusion of the study to measure diabetes risk factors.

“The findings suggest resveratrol can improve the body’s ability to use insulin and potentially lower the risk of developing diabetes,” Duleba said. “The supplement may be able to help reduce the risk of metabolic problems common in women with PCOS.”