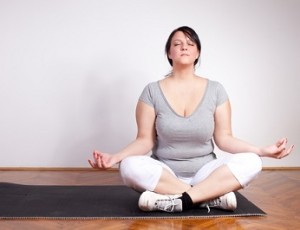 Natural Health News — New evidence suggests that a practice known as mindfulness-based stress reduction may help control blood glucose levels and improve quality of life in women who are overweight or obese.

Mindfulness-based stress reduction (MBSR) is a form of meditation that was developed by Jon Kabat-Zinn, PhD at the University of Massachusetts Medical School in the 1990s.

The practice involves paying attention to one’s thoughts, feelings, and bodily sensations in the present moment in a nonjudgmental and nonreactive manner through mindfulness exercises such as breathing awareness.

The results of the new study were presented ahead of the study publication ENDO 2015, the annual meeting of the Endocrine Society in San Diego.

“In overweight and obese women, stress may contribute to increased diabetes and cardiovascular disease,” said Nazia Raja-Khan, MD, assistant professor of medicine and obstetrics and gynecology at the Penn State College of Medicine in Hershey, Pennsylvania.

Dr. Raja-Khan and her colleagues conducted a pilot randomised controlled trial of 86 overweight or obese women who were similar in age and body mass index. The women received 8 weeks of either MBSR or health education control (HEC) and underwent a battery of blood tests and completed questionnaires at the beginning of the study and at 8 and 16 weeks.

In particular the scientists were interested in the effect of MBSR on fasting blood glucose levels.

When we fast the hormone glucagon is stimulated and this increases plasma glucose levels in the body. If a person doesn’t have diabetes, their body will produce insulin to rebalance the increased glucose levels.

However people with diabetes either don’t produce enough insulin to rebalance their blood sugar (typically in type 1 diabetes) or their body is not able to use the insulin effectively enough (typical of type 2 diabetes). This means that when blood glucose levels are tested, people with diabetes will have blood sugar levels significantly higher than people who do not have diabetes.

“Given the increasing epidemics of obesity and diabetes, this study is particularly relevant to the general public, as it demonstrates that stress management, specifically with mindfulness-based interventions such as MBSR, may be beneficial for reducing perceived stress and blood glucose and improving quality of life in overweight or obese women,” she said. “This research supports the integration of mindfulness-based interventions with conventional medical approaches to obesity and diabetes prevention and treatment.”