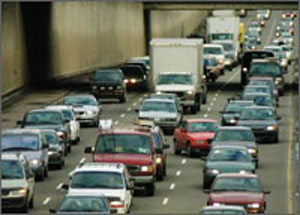 One major contributor to air pollution is fine particulate matter (FPM) which is made up of extremely small particles and liquid droplets. FPM forms when gases from car exhausts and gases from industrial sources react in the air. FPM can be found in smoke and haze.

But this new data, presented at the recent Gerontological Society of America’s 65th Annual Scientific Meeting suggests air pollution may be even more harmful to human health than previously thought,

The study involved about 15,000 white, black and Hispanic men and women, who had participated in the 2004 Health and Retirement Study, a nationwide survey of American adults over 50. The researchers matched the results of participants’ cognitive tests with maps of air pollution.

After accounting for several factors – including age, race/ethnicity, education, smoking and respiratory and heart conditions – the study found the more the air pollution, the lower the tests scores.

“I hope this research draws more attention to the adverse effects of air pollution on population health and particularly the health of older adults,” said lead author Jennifer Ailshire a sociologist, demographer and postdoctoral student at the USC Davis School of Gerontology where the study was conducted.

Ailshire and her colleagues suggest that older adults may be more vulnerable to the effects of pollution than other demographic groups.

She notes that by taking action to decrease air pollution, we can make a real difference in seniors’ lives

“There are a lot of factors that contribute to poor health and aging-related declines in health and functioning,” explained Ailshire. While many of these factors cannot be controlled – think genes and early life conditions – air pollution is something that we can change. “This is a health threat that we can do something about,”

Last year a study from US Davis, published in Environmental Health Perspectives, which used an animal model, found that after short-term exposure to FPM vehicle pollution, mice showed significant brain damage – including signs associated with memory loss and Alzheimer’s disease.

A German study, published in 2009 in Environmental Research, examined a group of elderly women living in areas with different levels of traffic-related pollution. Those women who lived in polluted areas performed worse on cognitive tests than those women living in other areas.

And it’s not just adults who are at risk. A 2012 study, published in the Journal of Alzheimer’s Disease, followed two groups of urban children. One group was exposed to a great deal of air pollution, while the other was exposed to minimal air pollution. Those exposed to greater levels of pollution had increased brain inflammation.