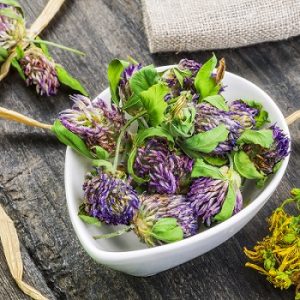 The plant estrogens in red clover are much more effective at relieving menopausal symptoms if the clover is fermented first. [Photo: Bigstock]

It’s a remedy rich in a type of plant estrogen known as isoflavones, that has been show to work for many – but not all – women.

Now Danish researchers suggest that the form of red clover can make a big different to how well – and how broadly – it works.  In a new study they found that fermented red clover stopped hot flushes and, in addition, prevented the accelerated menopausal bone loss affecting one in three women over the age of 50. Indeed the results showed the herbal treatment stopped bone loss in the spine completely.

“The challenge with isoflavones is that they can be difficult to digest as they naturally occur in the plant bound to sugar molecules which prevent absorption. Hence, a large proportion of the isoflavones that are consumed (e.g. as a pill or capsule) can pass through the intestine without entering circulation. This problem is bypassed when the red clover extract undergoes a fermentation process… [which] separates the sugar molecules from the isoflavones, thereby increasing bioavailability,” explains study author Max Norman Tandrup Lambert.

» Some, but not all women respond well to it and Danish researchers suggest that making red clover easier to digest by fermenting it first, may make it more effective for more women.

» In addition, it prevented the accelerated menopausal bone loss affecting one in three women over the age of 50.

In this small trial, published in PLOS One, 62 pre-menopausal women aged 40–65, who were experiencing more than 5 hot flushes per day and who had a follicle stimulating hormone (FSH) level of over 35 International Units Per Litre (iu/L, indicating they were at the menopause “stage) were enrolled.

The women received either twice-daily treatment with a liquid fermented red clover extract, providing 34 milligrams per day (mg/d) of isoflavones plus a lactic acid probiotic, or a placebo formulation for 12 weeks.

The probiotic was added, say the researchers because previous work has shown that it can improve bioavailability of red clover extract.

Within 24 hours there was a significant decrease in hot flush frequency and intensity in those women taking the red clover extract.

“After 12 weeks we tested again and were speechless about the data,” said Lambert. “There was a much greater effect than we had hoped for.”

The issue of bioavailability highlighted within this study is one which the research team say has often been ignored.

“Previous studies fail to account for inter-individual differences in GI microbiota of their participants or the molecular form of the isoflavones provided,” they commented.

“This has led to high variability in isoflavone bioavailability, bioactivity and efficacy in other clinical trials.”

These findings are important since to 80% of women may experience symptoms during menopause and it is estimated that in 2030 numbers of pre- and post- menopausal women will reach 1.2 billion globally.

While conventional approaches to menopausal such as hormone therapy may alleviate some symptoms they are also linked to an increase in cancer and cardiovascular risk. This is why, studies show, many women turn to natural remedies.

Fermented isoflavone supplements are beginning to appear on the market meaning more women can soon benefit from them. In the mean time, adding a lactic acid probiotic (eg  Lactobacillus acidophilus) to your supplement regimen may greatly improve the results you get with red clover.

The plant estrogens in red clover are much more effective at relieving menopausal symptoms if the clover is fermented first. [Photo: Bigstock]