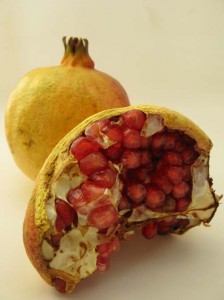 If pomegranate seed oil supplements reduced hot flashes by 39% - why is everyone saying it doesn't work? [Image: Morguefile]

Pomegranate seed oil for hot flushes – was it really a ‘failure’?

Natural Health News — The headlines are saying that pomegranate seed oil ‘failed’ to ease hot flushes and was ‘no better than placebo’. But is that really what the study showed?

Pomegranate seed oil has recently been marketed as an alternative remedy for menopausal symptoms because, like many plant oils, it is rich in phytoestrogens, plant-based hormones that can mimic the effect of estrogen in the body.

The study by researchers at the Medical University of Vienna, Austria, followed 81 postmenopausal women between the ages of 45 and 60. All of the women were experiencing a minimum of five hot flushes a day and had gone at least 12 months since their last menstrual period. Results were published in the journal Menopause.

Each woman took two 30-milligram capsules of pomegranate seed oil or ‘placebo’ pills containing sunflower oil daily for 12 weeks as well as keeping a daily diary of menopausal symptoms. At the start and the end of the study period, the researchers also tested the women’s hormone levels.

After 12 weeks, the women taking pomegranate seed oil saw a nearly 39% reduction in hot flushes, to 6.8 per day.

The women in the placebo group saw a drop of nearly 26% to an average of 7.3 hot flushes a day.

The researchers found no differences between the participants in their hormone levels before and after the 12-week treatment, but the women on pomegranate seed oil did report a statistically significant improvement in sleep quality and related symptoms.

So women who were suffering more from hot flushes saw a marked improvement in their symptoms and they slept better. But the study was considered a failure for pomegranate seed oil because the pomegranate group only had 13% greater reduction in flushing over the placebo group, something which the scientists say was not significant.

What did they mean by ‘placebo’?

Here’s some things to consider:

Sunflower oil is not a placebo. It is something which in other circumstances we recommend people to take to lower cholesterol or to boost vitamin E intake. In fact according to the National Institutes of Health a tablespoon of sunflower oil contains around 5.6 mg of vitamin E. Sunflower oil may also contain phytoestrogens (much depends on the processing). This was, therefore, not a placebo-controlled trial, but a trial of two low dose, but biologically active substances.

Secondly, 60 mg of any oil per day is a very low dose. It’s around .002 oz, or two one-thousandths of an ounce daily. That any effect was seen at all is a testimony to how little the body often needs to rebalance and reap benefits.

Finally, let’s pretend this was not a menopause study and it didn’t involve a natural product. Let’s pretend this was something ‘sexier’ (to use the vile media terminology) like saving babies lives with a new drug. If a specific drug treatment was 13% more effective than ‘placebo’ you can bet the trial would be hailed as a success.

The fact is that hot flushes are notoriously hard to treat because their origins are a complex mixture of physical and psychological/emotional.

Most women with hot flushes are put on drug therapy – usually some form of hormone replacement – which carries an increased risk of stroke and some estrogen dependant cancers, such as breast or ovarian cancer.

Lifestyle modifications, of which diet and supplements form a part, are a more natural way to deal with hot flushes and other menopausal symptoms.

There is some evidence that women who are more active tend to have fewer symptoms of the menopause. However, not all types of activity have benefits. High-impact exercise done every once in a while may even make symptoms worse. The best activity is regular sustained aerobic exercise, such as regular swimming or jogging.

Wearing lighter weight clothing, improving your sleep quality, for instance by sleeping in a cooler room, and reducing stress may reduce the number of hot flushes. Supplementary vitamin D may also help.

Some women find that things such as spicy foods, caffeine (in tea, coffee, cola, etc), smoking, and alcohol may trigger hot flushes. Avoiding these things may help in some cases.

You may also want to read our article Your Detox Diet for Menopause.

We need to know more

As for pomegranate seed oil (Punica granatum), research into its benefits is still in its infancy. Pomegranate seed oil can be used on the skin and makes a particularly rich moisturiser. It can also be used in the diet or taken as a supplement.

Apart from being rich in phytoestrogens, it is also a source of punicic acid, a conjugated fatty acid closely related to conjugated linoleic acid (CLA) – the healthy fat found in grassfed meat and dairy products.

Scientific studies, mostly using animals, have indicated that punicic acid may support the immune system, and help the body fight against human cancers, obesity, diabetes and heart disease. It’s too early yet, to pronounce it either a failure or a success as a treatment in humans.

If pomegranate seed oil supplements reduced hot flashes by 39% - why is everyone saying it doesn't work? [Image: Morguefile]