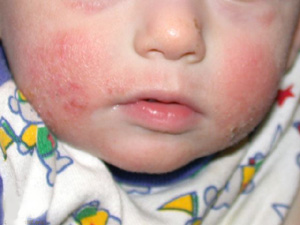 Natural Health News — When a child has atopic dermatitis, parents can struggle to help them find relief.

A recent study explored the role that a variety of supplements could have in the prevention and treatment of this common skin condition, which is a type of eczema.

Previous evidence has suggested that probiotics could help preventing atopic eczema syndrome in children. In addition, infants may benefit when their mothers take probiotics during pregnancy and breastfeeding.

Writing in the journal JAMA Dermatology researchers reviewed what they considered 21 high quality studies involving with nearly 7000 participants (pregnant or breast-feeding mothers, or children younger than three years old) that involved the use of:

Compared with a control group that did not take supplements they found that supplementing with probiotics lowered the risk of developing atopic dermatitis by as much as 50% and reduced its severity in children who already had it.

In addition, they found that theomega-6 fatty acid gamma-linolenic acid helped reduce the severity of atopic dermatitis among infants but did not prevent it. Prebiotics and supplements of black currant seed oil (which contains both omega-3 and omega-6) were also found to reduce the risk of developing atopic dermatitis risk though the effect was not as strong.

Probiotics – which can be consumed as capsules, tablets, beverages, powders, yoghurts and other foods – have long been recommended as a natural treatment for atopic dermatitis and allergies. A number of studies suggest that they have several beneficial actions including:

In 2012 another study found that probiotics may reduce atopic dermatitis in children.

The researchers randomly assigned 118 children 1-13 years-old to receive Lactobacillus plantarum or placebo twice daily for 12 weeks. At the end of this period the average change in the atopic dermatitis score was around 5 times greater in the probiotics group than the placebo group.  Furthermore, the number of eosinophils (a type of white blood cell produced in reaction to allergens) was significantly lower at the end of the study in the probiotics group.  The probiotics however, did not appear to make much difference in the use of topical corticosteroids.

The authors of the current study conclude: “Based on the available studies, the best evidence supports supplementing infants alone or both mothers and their infants with certain single probiotics (for example, L rhamnosus GG) or with a mix (L acidophilus DDS-1 and B lactis UABLA-12).”

They suggest further study may be needed before drawing firm conclusions about the effectiveness of black currant seed oil, prebiotics and infant formula.