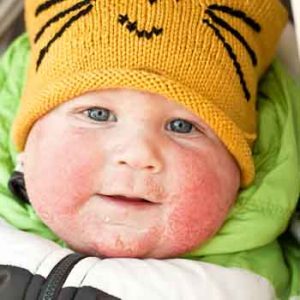 Natural Health News — High levels of water hardness in the home may be linked to the development of eczema early in life, according to a new study

Eczema affects around a fifth of children in the UK. A breakdown of the natural skin barrier function and dry skin are thought to be triggers in early life, partly through genetic predisposition.

Environmental factors including water hardness and chlorine in household water, may also contribute to the skin barrier dysfunction. In fact, in the UK, domestic water tends to be harder in the south compared to the north, and the prevalence of eczema follows the same gradient.

Previous studies in the UK, Spain and Japan have shown associations between domestic water hardness and the risk of eczema in schoolchildren. However, the link between water hardness and eczema has not been studied in early infancy.

» Some studies have shown an association between domestic water hardness and eczema in schoolchildren. But the effect on younger children is not well studied.

» In a new study from the UK researchers found that early exposure to hard water was a significant contributor to eczema in children aged 3 months, independent of any exposure to chlorine in domestic water supplies.

» The authors suggest that this is a significant finding that merits more study.

The latest study, published in the Journal of Allergy and Clinical Immunology, examined the link between water hardness and chlorine concentrations in household water and damage to the skin’s natural barrier and eczema in 1300 three-month old infants from families across the UK.

The infants were checked for atopic dermatitis (childhood eczema) and their skin’s barrier function was assessed by measuring transepidermal water loss (TEWL) on the skin of an unaffected forearm.

Infants were also screened for mutations in the filaggrin (FLG) gene which can result in an impaired skin barrier function, which in turn allows allergens to penetrate the skin and predispose the body towards an allergic response.

Information on the use of a water softener in the home, frequency of bathing and use of moisturisers and bath products was also collected.

Living in a hard water area was associated with an up to 87% increased risk of eczema at three months of age, independent of domestic water chlorine content. The risk tended to be higher in children with mutations in the FLG skin barrier gene, but the difference was not considered not statistically significant.

Although the study attempted to account for potential confounding factors, such as bathing frequency and the use of soaps and shampoos, skin care and hygiene practices which could have had an effect on early emergence of eczema or dry skin prior to the study. There was also no information on children’s exposure to swimming pools, which contain much higher chlorine levels than domestic water and could have an additional detrimental effect on skin barrier function and risk of eczema.

Dr Carsten Flohr, lead author from St John’s Institute of Dermatology at King’s College London and Guy’s and St Thomas’ NHS Foundation Trust said: “Our study builds on growing evidence of a link between exposure to hard water and the risk of developing eczema in childhood. It’s not yet clear whether calcium carbonate has a direct detrimental effect on the skin barrier, or whether other environmental factors directly related to water hardness, such as the water’s pH, may be responsible.”

“Interactions between hardness and chlorine levels, other chemical water constituents and the skin’s microflora may also play a role, and this warrants further research,” he added.

If your home is in a hard water area it is possible to fit an appliance to the mains water supply to remove dissolved minerals that make water ‘hard’. Using natural toiletries, free from harsh chemicals, on your baby may also lessen early damage to the skin barrier.