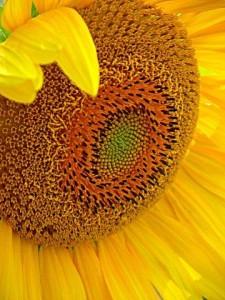 A special substance found in sunflower seeds could ease the itching of skin conditions like eczema [Image: Morguefile]

Sunflowers may hold the solution to a problem which gets under the skin of millions around the world every year.

Skin conditions such as eczema, dermatitis, rosacea pose an itchy problem for many sufferers world-wide, and many doctors are at a loss for how to treat them

But a group of researchers from Queensland University of Technology (QUT), in Brisbane Australia, are looking at ways to soothe the problem – using tiny proteins called peptides, found in sunflowers.

The researchers are trying to copy a peptide present in sunflower seeds known as sunflower trypsin inhibitor (SFTI), which is known to inhibit certain skin proteases – enzymes which play an important role in the skin’s constant regeneration.

Proteases in the skin are primarily involved with shedding old cells from the skin’s surface by breaking the connections which normally hold them together as part of a protective barrier. This requires a balancing mechanism to maintain regular skin structure and thickness.

Too much activity leaves the skin more permeable than usual, meaning it is open to allergens, infection and water loss.

The naturally occurring SFTI peptide is an effective inhibitor of a protease called trypsin, which resembles the kallikrein proteases in our skin.

The scientists’ goal was to harness the built-in activity of SFTI and modify it in such a way that it targets skin proteases more effectively thereby helping restore the skin to its original state.

The outcomes of their experiments, say the researchers, are likely to provide new insight into how proteases contribute to skin pathology and will potentially lead to new atopic treatments for sufferers of skin disease.

The ability of sunflower oil (the whole oil rather than just its components) to prevent moisture loss has already been noted in scientific studies. In one 2005 study in the Lancet premature babies in India were randomly divided into groups where either sunflower seed oil, mineral oil, petrolatum, mineral wax or lanolin.

The treatment was applied to the babies’ entire body apart from the scalp three times a day for the first 14 days of life, then twice a day until discharge.

Premature babies’ skin lacks the protective coating of vernix which prevents infections. Infections are responsible for more than 50% of all deaths in these babies.

In this study the infants treated with sunflower oil were 41% less likely to develop an infection than those using the mineral oils.

A special substance found in sunflower seeds could ease the itching of skin conditions like eczema [Image: Morguefile]