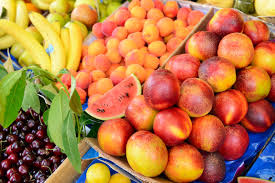 A fruity way to boost creativity

Steve Jobs, founder of Apple,  swore by a fruit diet, as he believed it improved his ideas.

Now it turns out he may not have been wrong. Anecdotal evidence suggests that creative people sometimes use food to overcome mental blocks and lack of inspiration, but empirical support for this possibility is still lacking. Now research is showing that food with high levels of tyrosine, like bananas, peaches and almonds, does actually allow us to think harder and more creatively.

In a study published in the journal Psychological Research, researchers at  Leiden University in the Netherlands, led by cognitive psychologist Lorenza Colzato, asked the 32 subjects participating in the research to visit the test lab twice.

They were given orange juice to drink on both occasions: the first time it included added tyrosine, while a placebo was added during the second visit. They were then required to solve various puzzles surrounding two main aspects of creative thinking:

Divergent and convergent thinking skills are both important to critical thinking. Not only that, they are interrelated and deep thought is the result of both working together.

In this study results showed that the test subjects who drank orange juice with added tyrosine were better at solving puzzles than those who were administered a placebo.

Fruit the secret to Apple’s success?

The results of the research support claims made by creative people, who argue that specific foods help them to overcome mental obstacles. Colzato: ‘Take a look at, for instance, former boss of Apple, Steve Jobs, one of the most creative minds of our time. He often claimed that his fruit diet formed the basis of his successes. And as fruit is rich in tyrosine, that might not be such a weird statement after all.’

According to Colzato, ‘Food rich in Tyrosine and food supplements that include tyrosine are a healthy and cheap way to increase our ability to think deeply. For instance, students who have to sit for an exam can benefit from added tyrosine.’

Tyrosine is a non-essential amino acid; this means that it can be made in the body using other amino acids and foods.

It helps to relay nervous system messages throughout the body, produce melanin, and to make hormones.It also increases the production of dopamine in the brain, which positively influences our ability to think creatively.

It can be found naturally in various kinds of fruit especially oranges, cherries, grapes, bananas peaches and pears as well as avocados, persimons, plums and figs. Salmon, turkey breast, pork sirloin, chicken breast, canned tuna, and Alaskan king crab contain the most tyrosine out of all the foods in this food group. Tofu is also a rich source as is low fat cottage cheese, parmesan and mozzarella cheeses. Seaweed is a fantastic source of tyrosine as are leafy land-based greeds such as pumpkin leaves, mustard greens, spinach, and watercress. Oatmeal and egg whites are also great sources.

Tyrosine can also be taken as a supplement.