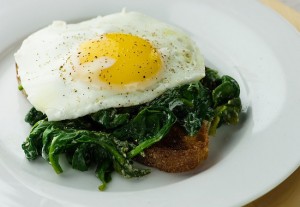 It’s the scenario we all dread: A child suddenly runs out into the road. But will you be able to break in time??!

Evidence from a recently published study suggests that if you had just eaten spinach or eggs you will stop faster. It’s all down to the amino acid tyrosine found in these and other foods.

The German philosopher Ludwig Feuerbach said it ages ago: “Der Mensch ist was er iβt”, or “You are what you eat”.

Substances that we ingest through our food can determine our behaviour and the way we experience our environment. The tyrosine study from the researchers at Leiden University and the University of Amsterdam was unique in that it claims to be the first-ever to test whether the intake of tyrosine enhances our ability to react lightning speed.

The positive effect of tyrosine on our reaction speed can have benefits for road safety. For example, if a queue suddenly forms, fast reflexes can prevent an accident. But there are many more examples.

Say the researchers tyrosine food supplements and tyrosine-rich food are a healthy and inexpensive way of improving our intellectual capabilities. This makes them preferable to Ritalin and Modafinil, products that students often reach for to improve their academic performance. Tyrosine is safe and doesn’t need a doctor’s prescription.

The body uses this amino acid to produce epinephrine, norepinephrine, and dopamine, brain chemicals that influence mood. Although we can manufacture tyrosine from the amino acid phenylalanine, dietary tyrosine consumption is still important. Under certain situations such as stress, your body may not be able to manufacture enough tyrosine, so a tyrosine-rich diet serves as a critical backup.

As with all amino acids, protein foods are the best sources, and tyrosine is no exception.

You can get tyrosine from a wide variety of protein-rich foods. Chicken and turkey are good meat choices. Eggs also contain a good amount. Tyrosine-rich dairy foods include milk, cheese, yoghurt, tofu and cottage cheese, and sea greens and algaes like spirulina.

Not getting enough tyrosine may also mean you are producing too little dopamine, something which can lead to depression and apathy.