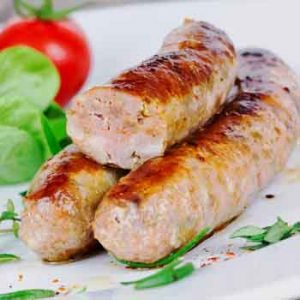 Pork is a good source of thiamine, but the preservatives used in popular pork products like sausages destroy its thiamine content. [Photo: Bigstock]

Are you getting enough vitamin B1 to help fend off Alzheimer’s?

A feeling of apathy or being a little forgetful from time to time is nothing unusual. But for some, this could be an early sign of not getting enough thiamine (also known as vitamin B1).

Long term, this can have serious consequences, including an increased risk of developing Alzheimer’s disease.

There is often a fatalistic attitude towards Alzheimer’s disease, with the belief that it’s a consequence of old age or it’s in our genes. But most old people don’t get Alzheimer’s disease, and it’s now clear that decisions made about lifestyle and diet play a huge role in singling out those who will – and those who won’t – develop the disease.

Ensuring your diet contains enough B vitamins is one of those crucial dietary decisions. And the central role of thiamine is now becoming apparent. The brain needs thiamine to use glucose for energy, and without adequate thiamine, brain cells die. The brain also needs thiamine to make acetylcholine, the main neurotransmitter that is deficient in patients with Alzheimer’s disease.

Thiamine levels are frequently low in patients with Alzheimer’s disease and the early stages of cognitive decline, and there are trials underway to see if taking thiamine derivatives can reduce the symptoms of this disease. The evidence is now pretty clear: a healthy brain needs an adequate supply of thiamine.

» Most old people don’t get Alzheimer’s disease, and it’s now clear that decisions made about lifestyle and diet play a huge role in identifying those who will.

» Ensuring your diet contains enough B vitamins is one of those crucial dietary decisions.

» Many older people, for example, who rely on ready meals for a large part of their daily nutritional intake may not be getting the thiamine they need to stay healthy.

So how can you be sure you are getting enough of this essential brain vitamin? In the UK, thiamine is added to fortified cereals and bread, and other good sources include whole grain cereals, pork, trout, peas and beans.

Government surveys in the UK present a generally reassuring picture, suggesting that for most people their thiamine intake is sufficient. But these surveys only report average intakes, and do not take into account groups who, for one reason or another, may be vulnerable to thiamine deficiencies.

One of the groups vulnerable to thiamine deficiencies is the elderly. And there are other groups, too, such as the steadily increasing numbers of people who avoid most cereal products (such as bread and pasta) because of gluten intolerance.

These food products are the main source of thiamine in the average UK diet, so it’s not surprising that many gluten-intolerant people are thiamine deficient.

Fortifying gluten-free alternatives with thiamine and other vitamins would be an obvious solution, but, unfortunately, this is not usually done. Followers of the Paleo diet also avoid cereal products, leaving this group vulnerable to thiamine deficiencies as well.

Pork is an especially good dietary source of thiamine, but many people do not eat pork. Also, if you prefer your pork as sausages rather than fresh meat, then you are waving goodbye to most of the thiamine, since, in the UK, pork sausages are preserved with sulphites that destroy the thiamine.

Some countries, such as the US, take a more sensible approach and have banned the use of sulphites in sausages for this very reason. Isn’t it time that the UK also removed sulphites from sausages and other foods where it is not necessary?

Sausages are also very popular as part of ready meals. Ready meals are a rapidly increasing sector of the food market, but there is no requirement to label their vitamin content. This is especially concerning for the many, such as many older people, who rely on ready meals for a large part of their daily vitamin intake.

And it’s not only sausages that are of concern. Thiamine is heat sensitive, and being water soluble as well, it leaches out of vegetables and beans during cooking, and so could easily be lost during the manufacture of ready meals. Without adequate labelling, we simply don’t know the extent to which this may be occurring. As I have argued, the rapid growth of the ready meals market means there is a strong case for demanding greater information on the vitamin content of these meals.

Taking a vitamin supplement may seem an obvious way to boost thiamine intake to help maintain a healthy brain. This may be a good idea for some people, but thiamine – unlike most other vitamins – is poorly absorbed when taken as a supplement.

There is a consensus among nutritionists that a better approach is a healthy diet, not least because multivitamin pills are linked to an increased risk of cancer in some people. Also, it is only with a healthy diet that we can be sure of obtaining the myriad of vitamins, minerals and phytonutrients needed for a healthy brain.

It is probably the wide range of brain-friendly nutrients – including thiamine – in the Mediterranean diet that makes it so effective at reducing the risk of developing Alzheimer’s disease. In a way, it’s a shame that the Mediterranean diet wasn’t “invented” by a drug company as a means to help prevent or delay Alzheimer’s. If it was, it would probably be one of the most widely marketed and prescribed drugs in the world.

It is not known to what extent thiamine deficiencies are contributing to the rise in Alzheimer’s disease. But despite the gloomy news about the rising tide of Alzheimer’s disease, there is certainly no need to feel powerless, as current research suggests that a healthy Mediterranean-style diet containing adequate thiamine can go a long way to help you fend off this disease.

Pork is a good source of thiamine, but the preservatives used in popular pork products like sausages destroy its thiamine content. [Photo: Bigstock]